Faithful Adaptation and The Hobbit 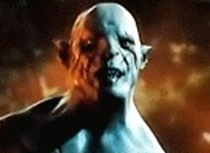 The week that the new Tolkien movie adaptation came out, I quipped on Twitter: "Is the first of The Lord of the Rings prequels out? Honestly, I would have preferred a movie of The Hobbit." This remark brings up an interesting distinction in the concept of 'adaptation' that I should like to explore.

Recall that Walton's make-believe theory of representation considers our engagement with representative art in terms of the imaginary games we play with the relevant props. In some cases, particularly those work of a megatextual nature such as Marvel comics or Star Trek, what serves as a prop in our game might be more than the individual work we are experiencing. There are often what I term secondary props that we use. In such cases there may be multiple games of make-believe we can play depending upon which secondary props we are using.

For “The Hobbit: An Unexpected Journey”, there are numerous games we can play. Firstly, we could take the movie as the sole prop in our game – in which case it is quite a poor artwork, as much of its content is entirely pointless without considering the relationships to other works. The framing story, for instance, asks that we consider the three “The Lord of the Rings” films as secondary, otherwise Frodo’s presence makes little sense.

I want to claim that because of the way it has been constructed, the prequel movie only makes sense with the main trilogy as its secondary props, and that it doesn't make sense to consider the novel of “The Hobbit” as secondary to its most obvious imaginary games. If the film were a faithful adaptation of “The Hobbit”, the book would necessarily play a secondary role in that choices made in its construction would refer back to the source material in a way that would show consistency. This consistency is absent, and with it the entire fabric of the movie (and presumably movies, too) ends up frayed at the seams, uncomfortably disjoint.

I shall say that a faithful adaptation of a book to a film always offers (but never requires) the book as a secondary prop. This means that if you have read the book, the imaginary games you can play are different than those you can play if you have not. This observation, I hope, is not too troublesome, as it presumably matches common experience. But this would also suggest that if you cannot incorporate the book a film is adapted from into your imaginary game without  serious tensions, the film is not a faithful adaptation. This, I'm claiming, is the case with Peter Jackson's newest film series.

It is worth noting how short the book is (roughly 150 pages) compared to the sequel (about 500 pages). As a result, there is a shortage of content a faithful adaptation can draw upon. Indeed, there are a number of entirely unnecessary sequences in “An Unexpected Journey” that come from the appendices of “The Lord of the Rings”, such as the discussion in the house of Elrond. These would not be necessary in an adaptation of “The Hobbit”, but are useful in making a prequel trilogy to “The Lord of the Rings”, both for length and for continuity. This would seem to allow Jackson to claim that it is a faithful adaptation of  the part of Tolkien's megatext (what Tolkien himself called his ‘legendarium’) that corresponds to “The Hobbit”. But this justification would also fail.

Consider the role of the Orc chieftain Azog in the film versus the book. Azog is mentioned in "The Hobbit" as having killed Thorin's father. However, in the legendarium Azog is dead by the time of the events of “The Hobbit” – and indeed Thorin earns the title ‘Oakenshield’ in the Battle of Azanulbizar where Azog is killed. The likely reason for keeping him alive in the prequel trilogy is so that Thorin can slay him in The Battle of Five Armies, at the climax of the story. But this battle, while a key event in the book, gets only brief coverage in one chapter of “The Hobbit”. But adapting to a trilogy requires material, and this battle is an obvious place to pad out the narrative. Azog serves a vital role in the prequel trilogy movies, therefore, because he is required for the payoff to the inevitable giant battle scene. But he is radically unimportant to the book.

This doesn't show that the prequels aren't faithful adaptations of the legendarium, in so much that Azog is a deeply minor character. But it does demonstrate that in making narrative design decisions for the prequels, Jackson will draw from any sources that might get him the length he needs to justify turning a book a fraction of the length of “The Lord of the Rings” into a film series the same length. “The Hobbit” is only one source among many in this respect, with “The Quest of Erebor” playing an extremely significant role – indeed, it may be fair to call the trilogy a reasonably faithful adaptation of the part of the legendarium that corresponds to “The Quest of Erebor” (a story which has “The Hobbit” as a secondary prop).

The biggest barrier to seeing “An Unexpected Journey” as a faithful adaptation of “The Hobbit” is that the tone is horribly wrong. Tolkien’s original Middle Earth fable has the atmosphere of a fairy tale, and battle sequences are naturally backgrounded while questions of character are foregrounded. Those scenes that are closest to the book – the trolls, Gollum, the goblin king – sit slightly uncomfortably against the fight scenes literally grafted onto the body of the tale. Offhand comments in the book, such as giants fighting in the Misty Mountains, become overwrought action sequences simply because they must if there is going to be enough material to make three movies.

“An Unexpected Journey” isn't a bad prequel to Peter Jackson’s “The Lord of the Rings”; nor to Tolkien’s “The Lord of the Rings” for that matter. But it is not a faithful adaptation of the book “The Hobbit” for the reasons I have outlined here. Whether this is a problem or not depends to a great degree on what game of make-believe you wanted to play, and with which props. For myself, I would still have prepared a movie adaptation of “The Hobbit” to a bloated trilogy of prequels, but I do appreciate the extent that Tolkien’s legendarium has been woven into the secondary props for these films, if nothing else. It makes me hope for a faithful adaptation of “The Silmarillion” in the future.