The Piano and the Armchair
A Rejection 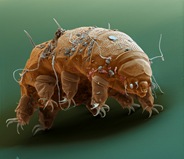 Does it really require 'credulity' to "believe in invisible life forms", as a certain science writer claims? If this means "invisible to the naked eye", most people today believe in such things, even without examining the evidence.  If it means "invisible to all known instruments", do you really think all such instruments have been found or can plausibly be constructed?

Few would call those in the former case 'credulous' for accepting things without examining the evidence personally, although maybe they should, on a strict definition of the term (a willingness to believe without having good evidence). On this basis, the lion's share of credulity in the world today is in respect of the objects of scientific study, since it is the minority - even among scientists - who check the evidence in all cases, and the sciences produce or describe a dizzying array of ever-diversifying objects. I suppose the doctored photo of the tardigrade above counts as good evidence, but I believed in the existence of these microscopic critters the moment I heard about them – I did not check the evidence (although I wished I still had a microscope so I could look for them in my house's gutters!).

Furthermore, if we allow for super-organisms I'm not really sure that the super-organism that occupies (say) the city of Chicago is strictly visible. Sometimes you can only see the parts of something, but that doesn't mean it isn't there. Plenty of people believe in the existence of climate change, but no-one has actually seen it, nor will they (this is precisely what Timothy Morton means by a hyper-object). What is the reasonable proof required to believe in the existence of something like a super-organism or a hyper-object that is primarily conceptual? And what, let's face it, can we know about that isn't conceptual at some level?

As I mentioned in Moore’s Paradox and the Belief in False Things, I believe in the essential goodness of humanity, something I also know is either false or untestable – this belief is therefore credulous. Nonetheless, I am unlikely to give it up no matter what evidence you present me. The person who thinks they can live their life without relying upon their own credulity at least some of the time is probably deceiving themselves as to the epistemic criteria they are relying on.