This is an open letter to Oscar Strik, but I’m happy to accept replies from anyone who is interested. 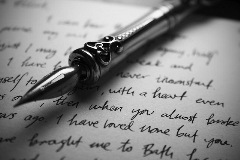 What can be done about the state of interpersonal discourse in an age when all the deep forms of communication are being replaced with shallow forms? If the choice is between the empty gesturing of social media and the pedantic nitpickery of academic journals, what options are actually left to foster virtuous discourse between peers? And without this, what hope do we have of solving any of our problems, no matter how trivial?

As you know, I’ve been wondering for some time now if it is possible to get back to the earlier state within the blog clusters, when dialogue between blogs occurred on a regular basis. I’ve finally decided to see if I can push matters in this direction by simply writing a blog post addressed to another blogger. Perhaps the problem isn’t that the blogs no longer communicate, but that we no longer have the critical mass for these exchanges to occur spontaneously.

Social Media. The problem I see with all our social media channels is the inescapable shallowness of the discourse. Although I enjoy Twitter, it has the character of a idle ramble at a crowded party, or (better) a MUD chat room – which is precisely what it descends from. This is a fun way to stay in contact with distant people, but nothing substantial can happen under the constraint of 140 characters. Google+ (and I assume Facebook, although it still terrifies me) is hopeless. Not only is the attention a post receives directly proportional to the time of posting, with the US inevitably favoured above every other location, but G+ is basically an aggregator of vaguely interesting or entertaining things. What floats to the top is the bubblegum content, and there is no mechanism for deep engagement on a topic. If the Communities are supposed to achieve this, they fail because they are really just usenet-style bulletin boards with all the political and emotional problems these inevitably develop. I don’t have a problem with social media being there, but we can’t look to it for virtuous discourse.

Journals. In principle, academic discourse would seem to be the place to go for deep engagement with an issue – which only makes the actual state of journals all the more depressing. Although it is not really anyone’s fault (being more a problem with the double blind peer review format), journals arrange for strangers to take forever to pick holes in each others work without any productive discussion to establish a context, or ongoing discussions afterwards. I find I detest the form, especially in the humanities where the attempt to appeal to the values of the sciences in terms of a fantasy of ‘objectivity’ becomes openly ludicrous, instead of merely quietly insane. Furthermore, each academic is armed with a quiver full of different points of reference, and discourse devolves into warfare as Foucault and Deridda are fired vainly at positivists, who shoot back Plato’s rhetoric without even knowing what it is! Outside of the journals, the situation is little better – look at Chomsky and Zizek hunkering down for a spat over he-said-she-said hearsay. Oddly, academics at conferences have great discussions – so why can’t the same level of engagement be found in journals or elsewhere?

Blogging. When I came to blog, the most liberating aspect was how it solved the political problem of the discussion board format by eliminating the power struggle. Lock a dozen geeks in the same virtual room and they inevitably end up arguing vociferously – and the notice board format means there is no possibility of cool-down or diplomacy. Once war breaks out, cordial relations collapse until somebody quits in rage. On a blog, however, you are the master of your own space and everyone else simply stays away when they’re unhappy with what you’re saying. You can have better discussions because everyone is not trapped in the same space. They can go elsewhere, come back later, or simply let it lie. Of course, with the dilution of the blogosphere by other forms of social media, the same diffuseness ends up meaning no dialogue takes place. I’m intrigued to see whether writing blog posts for specific bloggers can counter this trend.

Virtuously Virtual. You’ve already read my next book, Chaos Ethics, so you know where I am coming from in ethics; my hope is that it is possible to produce virtual communities of ethical discourse, and by this I mean only that we will support each others conceptions of the good (whether as virtues, duties, or as consequences) and help one another strive towards better worlds without accidentally or intentionally forcing our own world onto other people. Blogs seem to me the best place to start this, but perhaps it is possible to take it into the social media as well – if we can overcome the vacuity of the ‘+1 = cute or curious’ syndrome. But aggregation is perhaps the enemy of virtuous discourse because it escalates sensation instead of substance. It may be necessary to ground substantial discussions in actual interpersonal exchanges to attain anything worthwhile, no matter how trivial.

Republic of Blogs. A long-standing player of Only a Game once suggested that their interest in blogging came from the parallels with the ‘Republic of Letters’ – the long-distance intellectual community of the 17th and 18th centuries. As I have become more enmeshed in other forms of social media, this ideal becomes more and more appealing to me – hence my concern about the extinction of blogs. I don’t see anywhere else that could serve this role other than the blogs; email is too private, social media is too superficial. Hence I’ve written you this blog post, my first ‘letter’. I hope to try writing more of these next year. Call it an ethical experiment!

Wishing you all the best for the Winter Festivals,

dj i/o:
The value of a myth of a golden age is in orienting how we behave going forward. :) The 'good old days' may be over, but it's never too late to bring back what once we had - provided there are others who also want it. Such is my hope here.