The Dragon of Chaos

An open letter replying to Oscar’s A Chaotic Gift at Sub Specie as part of the Republic of Bloggers. Further replies welcome! 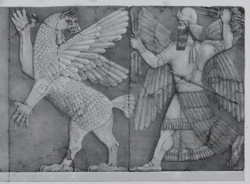 For as long as our civilizations have discussed it, ‘chaos’ has been a dragon to be vanquished. The Mesopotamian mythologies called this dragon ‘Tiamat’, and expressly associated her with primal chaos and the ocean. Much like the Olympians siblings slaying their parents, Chronos and Rhea, Marduk and his buddies slay Tiamat and her mate who sired them. The same motif, known as ‘Chaoskampf’ (struggle against chaos) occurs in all the city-building cultures as far as I can tell. A storm god (like Marduk) slays a sea serpent (Tiamat).

However, this is not the beginning of this mythology, since there is an older myth that appears either as a prologue to the war or as an alternative. In this story, the chaos dragon is the creator goddess who – through a sacred marriage between salt and water – creates all things, and does so peacefully. The implication that I read here is that the city states had to slay the dragon of chaos because rule of law – the acceptance of one form of order – was essential to civic life. The wars of religions and non-religions in the centuries since stem from the need for order to be understood as one single order, such that all other attempts at order are necessarily enemies to be destroyed. This, as you know, is something I touch upon in Chaos Ethics: Moorcock's mythology of the Lords of Law versus the Lords of Chaos (which I am inescapably indebted to) draws from this same deep well.

Today, the two chief sources of a claimed order are the religions and non-religions of the Abrahamic traditions (including the non-religion of Human Rights that descends from Christianity via Kant), and the positivistic non-religions that accompany the sciences. The latter are currently highly influential yet are sometimes even more problematic than the religious traditions they grew out of! It is not a coincidence that the sciences share an Abrahamic mythology of order: for early European scientists like Newton and Galileo, the order of the universe came from God, although often the deist God who had retired from meddling to enjoy an eternal vacation. The atheistic strands of positivism that valorize the sciences as sole truth-giver are far less removed from their traditional roots than many are able to recognize. It is because the fetish of Science (with a capital ‘s’) that mythologizes the disparate and incompatible practices of empirical research into a single order is nearly indistinguishable from Deism (with the obvious proviso that mentioning God is strictly verboten) that atheists are able to celebrate Galileo as if he were ‘one of us’, despite his actual beliefs.

But Positivists have managed to offer a new spin on the Chaoskampf – now, the dragon cannot be slain for it was never real. Everything, these days, is an illusion save whatever Science declares as real. Rather than defeating the beast, it is instead tamed by being theorized, hence ‘Chaos theory’, which admits to a limit of prediction, thus neutering the dragon by making it knowable. This is something which earlier scientists would have struggled with – a front whose last stand might have been Einstein's famous declaration that “God does not play dice”. I suspect that scientists raised in the Hindu traditions would have found this easier to accept, thanks to the notion of ‘lila’, or ‘divine play’ – a very different take on the ‘dragon’ of chaos that sees the universe unfolding as play, much as the primal chaos of Tiamat was once seen as the wellspring of all that exists.

But chaos cannot actually be domesticated this way, and ‘Chaos theory’ might just have been called ‘limit theory’. Chaos, the opponent to order, is ineradicable – except, as Moorcock shrewdly observed – by eliminating all life. For life, which is born from chaos in our oldest mythologies, is always chaos conditioned by order, and if it were not nothing much worthwhile would have happened. Consciousness cannot sensibly be understood as an inevitable product of evolution unless evolution itself becomes a fetish – which it often does! If life had solely been order, there would have been no need or possibility of the strange complexity of multi-cellular life, which constantly injects the unexpected into systems otherwise fine tuned by the passage of aeons into comfortable stasis. Mutation, itself mythologised, is far less important to this story than is usually imagined. Rather, a key player is the virus that, with its shuffling of genetic sequences, brings chaos through the imposition of its own order – which may or may not be detrimental to the order of the organism so tampered with. There are more threads here, of course, but all entail some sense of chaos.

Chaos, then need not be disorder or the absence of order because it also springs from the clash of orders. Order from chaos, chaos from order... the two concepts inevitably intertwine since it is only from our capacity to recognise order that our counter-concept of chaos arises. Marduk requires Tiamat or his victory has no meaning. Furthermore, it is inconceivable that a being could exist that could sense chaos and not order since, as Kant recognised, our ability to have concepts and fit things into them is core to our existence as beings and it requires first and foremost a sensitivity to the patterns in what we perceive – the order of things as we are made to encounter them.

Many of the points I raise here are related to those in your wonderful letter that I am replying to here, and I hope the two work together as a counterpoint – although this first movement only vaguely gestures at the depths of this fascinating concept. In particular, the connection between chaos and play (in Caillois’ paedia, for instance) would be a vast topic in its own right, and the uncertainty of chaos contrasts with the order of rules in a manner that parallels the way social rituals attempt to mediate uncertainty in life (a topic also touched upon by Caillois, and well-developed by Thomas Malaby).

Central to Chaos Ethics is this idea that there can be such a thing as moral chaos, that moral law is not and cannot be the entirety of ethical existence... For me, as a Discordian (one of my five religions), it has been easy to accept this premise but harder to validate this in a way others might accept. But it intrigues me that as a Christian (my first but not only religion) I feel moral chaos is the duty of anyone who actually takes Jesus’ ministry to heart – and as a Hindu (albeit one who is also an outsider to these traditions!) I find these problems already covered rather well in the older teachings. We forget sometimes that dragons are not only to be slain – they may also be venerated. Tiamat slumbers in the depths of the ocean, wounded by the storm god but not defeated. Perhaps she may yet awaken to aid us against the stifling hegemony of an order so far from the good as to threaten any hope of forging lives worth living.

Oscar has not replied yet.

No-one else has replied yet.