The Echoes of Genre
Struggling for Independence

Exterminate! The Dalek and the Drone Assassin 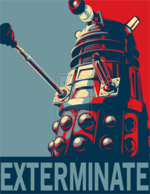 The Daleks, the most feared race in the science fiction universe of Doctor Who. But is their terrible warcry of "Exterminate!" just a chilling historical reference to the Nazi's 'Final Solution', or is it also a horrific reflection of our own willingness to let our technology distort our ethics when it comes to violence?

There is an incredible scene in the Chinese epic Romance of the Three Kingdoms in which the military strategist Kongmong (or Zhuge Liang) commiserates with his enemy, the barbarian chieftain Meng Huo. Putting aside the radical differences with the historical personages these characters are based upon, what is striking about the scene is that two warriors who might be considered brutal by today's moral standards do something we can no longer countenance: they share in the grief of an enemy. Meng Huo's forces have been using rattan armour, a lacquered wood that is proof against the swords and spears of the invading forces. Kongmong reasons that if this mysterious defense is proof against both metal and water (the battleground being around dank forests), it must be vulnerable to fire. He thus sets an incendiary trap - but it is too successful. The laquer ignites and the soldiers are all burned to death. But rather than boast of his victory, Kongming weeps with Meng Huo over the terrible loss of life. Despite the savagery of this era, it is still devastating to Kongming to have caused death on such a scale. And so he weeps both for, and with, his enemy.

By comparison, the fictional Daleks shed tears for no-one. They are absolutely assured of their racial superiority, and thus have a mandate to eradicate all other species except when their own plans require enslaving the lesser races instead. Terry Nation, who created both the Daleks and the dystopian science fiction show Blake's 7, modelled the Daleks upon the Nazis, a theme that is most explicit in the final Dalek story of the classic era, Remembrance of the Daleks. Although extermination was a thematic element of the 1960s Dalek stories, it wasnt until 1972 that "Exterminate!" became their de facto warcry, an outcome that owed as much to British newspapers popularizing the phrase in connection with these cybernetic murdererers as anything else.

Fiction is the mirror of our moral selves and we can learn a great deal about ourselves from how we relate to ethical situations portrayed in stories. In the cases described above, we have two odd extremes of a some kind of ethical scale: war is an accepted tool by both Kongming and the Daleks, but the former aims not at the eradication of the enemy but in fact hopes to make them allies, something the aliens from the planet Skaro could not possibly contemplate. We cannot, I suggest, see ourselves in the Daleks, who are as close to absolute examples of moral wrongness as we are likely to find. But we also cannot see ourselves very well in this particular Kongming story - since when do we commiserate with our enemies these days?

The chilling fact of contemporary warfare is that we are far closer to Daleks than we are willing to admit. The familiar 'pepper-pot' shape of the Dalek is a machine (a 'travel machine', as it is called in Genesis of the Daleks) intended to house the mutated descendants of a dying race of humanoids on the planet Skaro. The scientists who make this device have in mind only their ability to continue as a race, but the twisted genius Davros adds a weapon to the casing and genetically engineers the organic occupants to have greater aggression and an absence of empathy and pity. There is a sense, therefore, of the Daleks being destined towards extermination. But in many respects, it is the addition of the weapon to the travel machine that transforms the Daleks from a means of survival to a means of extermination - and this parallels contemporary usage of robotic drones.

UAVs, as the military penchant for acronyms renders them - 'unmanned aerial vehicles' - are also a kind of 'travel machine'. They allow telepresence in remote locations, such that an operator in the United States can fly a drone (as I shall insist on calling them) on the other side of the world. Technology, our Enlightment mythology assures us, is morally neutral, and we should only be concerned about the ways we use our tools and not the tools themselves. Yet for some reason, we are not on the whole significantly concerned about the CIA mounting explosive missiles upon these drones and using them to strike at targets in Iraq and Pakistan. I suggest this is because we think of such deployments as being used 'against terrorists', despite an endless array of evidence that these drone assassinations have resulted in many hundreds of deaths among civilians who simply have the misfortune to be neighbours of those who have been marked for death by military bureaucracy. The facts of this horrific practice are not in dispute. Yet still, we do not weep for the enemy, nor even for the innocents slain in pursuit of the morally reprehensible goal of mechanized extermination.

I'm saddened to report that not long ago I discovered that someone in my circle of acquaintance was working on autonomous guidance systems for military drones. I am reluctant to force my moral values upon others but I had to confront him on this. "They only use drones to kill terrorists" was his shocking reply. Even if that were the case, which it manifestly is not, are we now so far from critically challenging our technology that we would walk into developing not mere Daleks, which after all are still vehicles, but autonomously murderous machines? Never mind the mythology of Doctor Who, this is the nightmare future of The Terminator we are sleepwalking into!

There is an oft-quoted comment from one of Heideggar's lectures that is usually quoted with horror:

Excluding militant vegans, who value non-human animals radically more than most people, this line is taken as a sick conflation of the moral value of a chicken or cow to that of the Jewish people. (I have never seen the lives of the Japanese civilians slain by the hydrogen bombs brought into this expression of outrage, however.) While Heideggar's remark was certainly ill-chosen, at its heart is a recognition of the risks of pursuing death as an automated process. The Daleks and the Terminators are science fictional expressions of this concern. Drone assassins are its horrific manifestation in contemporary war. If we cannot recapture some scintilla of the remorse Kongming shows in accidentally exterminating enemy combatants when we face down our intentional extermination of innocent civilians, we must urgently ask those who serve in our armed forces to find new moral values for the battlefield. For today, it is our own forces whose warcry has unknowingly become 'exterminate!'

I agree that the Dalek and the Drone are disturbingly similar (though I'd draw the line of "armed travel machine" back much further - the attack helicopter is a clearer example, as the first helicopter gunship was in face a transport helicopter [a 'slick'] with a bundle of rocket pods welded to the front, and the 'Spooky' C130 Gunship, game-famous from the Death From Above level of Call Of Duty 4, was originally a heavy transport aircraft, with howitzers mounted on one side), I would question that the issue with Heidegger's statement is purely that he seems to be conflating Jews and chickens. It's also down to his personal complicity in the Nazi regime, and his history of anti-Semitism.

DapperAnarchist: these are actually two lines of discussion that I ended up omitting for brevity, wanting to keep this piece relatively concise. :)

I agree - the drone is the culmination of a trend in war machines, and not a beginning point. But it is a potent symbol of a problem that we are only just starting to take seriously.

As for Heidegger, I'm wary of hearsay and uncertain as to how strong the case of anti-semitism in his regard actually is. Karl Löwith suggests that the Nazis were not convinced his national socialism was sufficiently motivated by concerns of racial purity, which would seem to tally against this claim. Certainly Heidegger did not speak out as much as he could have done - but I think this is true of a great many people in Germany at that particular time... Honestly, I am far from an expert on Heidegger, so perhaps it is best that I not say any more than that.

Many thanks for the comment, especially the historical references to the origins of attack helicopters, which is new to me.