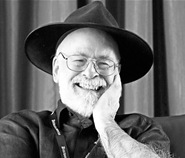 It’s been a week since Terry Pratchett passed, and I have still failed to write about it. The news upset me more than I would have anticipated, given that I have not even seen Terry since 1999. I have a closer relationship to Rhianna, his daughter: we’ve made games together, and meet up for a chat whenever we get the chance. The extent of my engagement with Terry was merely that I worked at a company making games in his Discworld universe.

But then, Terry was the first editor I worked with, and also the best of them all. I not only learned a tremendous amount from him, but in many respects he was the foundation of my career as a game designer and writer – if it had not been for the critical success of Discworld Noir, I could not have founded International Hobo. Erasing Terry from my life would be destroying all that I am and leaving only the wispy aspirations and tedious angst of the person I was before I started work at Perfect Entertainment.

Yet, I have failed to write my farewell. At heart, my problem is that I feel like a fake drawing on my repertoire of Pratchett anecdotes to wax lyrical about a man I was privileged to work with but could never actually know. I feel as if writing about these experiences would be the act of someone desperate to garner fame from proximity – it would solidify my position as an H-list celebrity while exposing my insignificance; the shadow, glibly praising itself for its proximity to the flame. I feel certain I will write about my experiences with Terry at some point, but I cannot do it now without feeling worse than I already do.

I will say goodbye to Terry some day, but it seems I cannot do it today. Yet I can already thank him, as I did in the last letter I wrote to him, for having such an extraordinarily positive effect on my life. And I will miss him, even though he was never really there. This, I suppose, is the effect that any great writer has through their work.