Sounders of the Depths 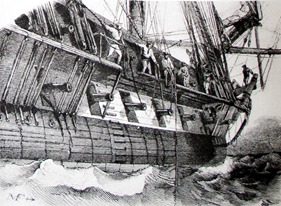 What is the role of the philosopher? Discovering the truth? Forming theories? Conceptual plumbing? Or perhaps something more subtle, more humble. Perhaps the philosopher is the sounder of the depths.

I’m reading Philippe Pignarre and Isabelle Stengers’ Capitalist Sorcery: Breaking the Spell at the moment, about which there will be more anon, but right from the outset it presents an interesting alternative perspective on the role of philosophy. They compare what they are attempting to do in this book with the role of those who used to travel upon sailing ships with a plumb line, checking the depths of the waters and avoiding the risks of wrecking upon unseen reefs. Stengers is a philosopher with an acute sensitivity to the power of words, and uses them with care. Writing with fellow chemist, Pignarre, she offers this warning:

Sounders of the depths should not invent words that are to be understood as beyond division, as if they were authorised by a transcendence in the presence of which everyone must kneel: that is the role of the prophet, or his substitute today, the theorist. The words to be created ought rather to serve as antidotes to what transforms divergences into oppositions, what makes us dream of a homogeneous unanimity, of a judgement that will at last confer on history the power to recognise those who had seen correctly.

There is in this paragraph a rejection of the vision of philosophy offered by Plato, of the philosopher as the one who travels outside of the ordinary world to discover the truth and then return with it – and suffer the consequences of doing so. Stengers (if I may, by supposition, separate her from her co-author) is here aligning with her ally and friend Bruno Latour, in rejecting the legacy of Plato, suggesting that this makes the philosopher into prophet. Against this could be contrasted Mary Midgley’s suggestion that philosophy can be understood as a kind of ‘conceptual plumbing’, a view to which I am strongly drawn.

Intriguingly, Stengers and Pignarre also align the prophet with the theorist, and in so doing offer an additional rejection of the view of philosophy offered by Kendall Walton as ‘theorising after all the facts are in’. I have a great deal of sympathy for Walton’s view here, and it is important to recognise that the kind of philosophical theories that Walton deals in, such as the make-believe theory of representation, or the strange yet compelling idea that we ‘see through’ photographs, are not theories that result in action. There is a distinction, not often noticed, between those theories that give us new ways of seeing the worlds we live in, and those that enact or demand ways of changing those worlds. Here, we may see a distinction between philosophical theories (whether or not they are created by philosophers), technical theories (that may bankroll new kinds of technology), and political theories (which may initiate action, and all the dangers therein that Hannah Arendt warned of).

It is worth noting that a scientist can create both of the first kinds of theory – philosophical and technical – but not legitimately the third, and also that technical theories can have all of the impact and risks of political theories yet are typically treated as morally neutral. It is in this capacity that I strived, in Chaos Ethics, to offer a warning. I was, although I had not thought about in these terms, trying to be a sounder of the depths – but I fear that I fell too easily into stridency, into polemic. Although I was trying to resist offering a specific political theory, I perhaps did not sufficiently distance myself from the role of prophet. Perhaps I still managed to be a sounder of the depths… it is sometimes hard to be sure of the meaning of one’s own work.

What Stengers, Pignarre and I have in common is a sensitivity to the needs of the moment in which we are living. But where they succeed, and where I fear I have failed, is in resisting the easier rhetorics. They write:

Some people place their confidence in urgency, that of an Earth whose ravaging would force us to understand each other under pain of being destroyed. Others evoke opposition to a common enemy as sufficient to found the necessary understanding. We fear the confidence in the pedagogical power of catastrophes a great deal and the power given to the common enemy to unite us leaves us more than doubtful. That is why we feel ourselves bound to the position of ‘Sounders of the depths’, attentive to the danger of the traps that menace us: that of thinking that tolerance with regard to divergences ought to be enough; that of thinking that we can take shortcuts with regard to the practices that may tum these divergences into a force.

I find in this image of the sounder of the depths a renewed hope in the power of philosophy to make a difference in our worlds. But this capacity is a danger when it is not bound to the humility of one who must stand on the outside of the ship, and focus upon the risks, with no possibility of ever determining the course that will be set.

It's hard to remain a descriptivist in a world that seems increasingly filled with prescriptivists.

It's equally hard these days to celebrate the true scientists, who are skeptical, patient, and humble in their awareness of the limits to human comprehension, when activists in lab coats are lauded for mocking anyone who questions their certainty.

It's as though a consensus has formed in Western civilization that the only path to feeling a sense of self-worth is by staking out some tiny patch of turf, declaring it to be holy ground, and noisily insisting that one is prepared to defend it to the death... and then hoping a lot of people will conclude there must be treasure buried there.

We are all self-publicists now.

Hi Bart,
It's funny: the sciences are full of researchers who understand the limitations of their methods, and yet few are willing to push against the mythos of 'the scientific method' that is invoked to explain their successes, even if quite a few must realise at this point that this in no way describes the way successes in the sciences are attained.

But you highlight, I fear, the nature of the problem in this regard: that the humble and patient researcher is not one to draw attention to their work, and is thus consistently eclipsed by the vocal self-promoter. In an era when seeking funding requires scientists to make all manner of compromises, this exacerbates all manner of problems.

For me, this brings into focus that part of the problem with our relationship with the sciences is not the scientists, per se, but their relationship to the news services, who leap upon every 'new discovery' to report as news, which is obsessed (as the name implies) with 'the new'.

As you say, 'we are all self-publicists now'. I feel this acutely.