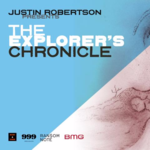 Next week, I'm honoured to be part of a special event as part of the new exhibition by acclaimed DJ, artist, and record producer Justin Robertson. The exhibition is The Explorer's Chronicle, which sounds utterly fascinating:

The cornerstone of the exhibition is the first showing of Justin’s new collection of art - presented in a mixture of media. Drawing on the great tradition of botanical sketching, his inspirational work depicts the flora and fauna of this alternate universe, finding inspiration in the patterns of the natural world. Other themes include magik, possession, the supernatural, fantastical creatures, the history of belief, past times and cultures, uncertainty and alien life forms. A dedicated book of illustration and text and a bespoke soundtrack will accompany the exhibition.

My event, on the second day of the exhibition, is Futurism v Fatalism: Is the Internet liberating or imprisoning?, with free tickets available from the preceding link. I'm thrilled to be on the bill with an array of awesome folks such as:

I'll be giving a presentation entitled Cyberfetish and the World of Tomorrow, the blurb for which I ran a few weeks back, and asking what we can learn from the Cyberpunk literary movement of the 1980s.

The exhibition is free and doesn't require a ticket, but you need to get tickets for the Futurism v Fatalism event at Ransom Note's eventcube page.

Hope to see you there!