Prezi: Cyberfetish and the World of Tomorrow
The Aesthetic Flaws of Games - in Polish 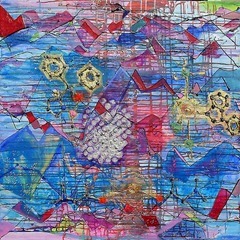 Do we live in a ‘Scientific Age’? What would that phrase mean, and how could we judge – scientifically – if it were true?

I recently read a piece in The Atlantic on free will that disappointed me. I’d already been checking up on the state of the art for this topic (see Is Free Will Too Cheap?), which has become particularly interesting in recent years. But nothing of that could be found in the piece in The Atlantic, which felt suspiciously more like a poor excuse for a Sam Harris interview. The article closed by tacitly declaring that we live in “the scientific age” – and that rather amused and annoyed me. Because if that were a fair characterisation of our time, would that not be blaming scientists for our rather dreadful global predicament? My sense of this, as a scientist by training, is that there is no empirical basis for such an attribution, and that rhetoric (rather than evidence) is what motivates such an assertion.

To properly explore this, we must first ask: what does it mean to characterise an Age? For the most part, the practice of defining Ages has entailed a historical or mythological assessment. Hence, for instance, the attribution of a Golden Age in ancient Greece, which was a mythic time before humanity messed everything up. The Age of Sail and the Age of Steam were likewise retroactive attributions, albeit in these cases based on historical rather than mythological considerations. It actually makes more sense to make these kinds of assessment after the fact, since only then can the relative competing factors be weighed carefully against each other – although even then, the choice to assign an ‘Age’ shows a bias in focus at the very least.

It is only with the twentieth century that we see attempts to characterise history in the present tense – and even these seem relatively dubious upon later reﬂection. The Atomic Age built upon fantasies about the future born of the New York World’s Fair of 1939, but as it happened nuclear energy did not characterise much of an Age, since it gave way within decades to the Space Age, which was equally short-lived. The frequent use of ‘space-age’ as a marketing adjective links both these science fiction tales to the flourishing capitalist production line – and indeed to their rhetorical deployment against the Soviet production line that was almost indistinguishable apart from its overriding mythology. Industry, either side of the Iron Curtain, was much more important than science, which was (and is) industry’s bitch.

This analysis is not scientific, of course, but rather historical and political. Our second line of enquiry must then ask: what do we mean by ‘scientific’? The usual invocation here is ‘the scientific method’, the cycle of observation, hypothesis, prediction, testing, and eventual theory. However, empirical observation of scientists at work has not validated this as a general method applied by researchers, and it appears to operate more as a catechism than as a practical methodology. (You would not get very far using solely this method as-stated for a research project!) A key problem is that observations are themselves theory-laden, and as the historian Thomas Kuhn observed it is never the case that observations alone determine how one theory replaces another. The wider philosophical questions here are not vital to the current discussion, however, only that ‘the scientific method’ is not a means of distinguishing what is scientific from its alternatives, regardless of its uses as an educational dogma.

What distinguishes most things that are called ‘scientific’ from other disciplines that deploy evidential reasoning is the possibility of verifying judgements, a point discussed at length by Karl Popper. Evidential reasoning in the humanities invites a relationship between propositions and conclusions, yet the propositions themselves entail an element of judgement but not of measurement. Conversely, ethology (study of animal behaviour) entails judgements that are open to verification by further observation. This field, which does not resemble the archetypal ‘scientific method’ at all, nonetheless entails a substantial element of verifiable judgement.

Yet a grey area occurs. Some physicists insist, for instance, upon a quantum multiverse – the existence of which is essentially impossible. (Indeed, the word ‘existence’ has a questionable meaning in these kinds of context). We then might be tempted to extend ‘scientific’ to mean ‘asserted by scientists’, at which point the phrase will cease to distinguish anything useful. Many scientists will assert that George W. Bush was a fool, but that should not be mistaken for a scientific claim: that would require some means of verifying the judgment that was not merely anecdotal. We ought to be careful about this distinction if we value the work of scientists, since the credibility of the term ‘scientific’ is all too easily strained when we start deploying ‘Science says...’ as a form of prophetic persuasion.

Suppose we accept my provisional criteria for determining something as ‘scientific’. We can then ask: what would be required to scientifically judge our time as a ‘Scientific Age’? Immediately it should be clear that it will necessarily fail to qualify for this accolade; firstly because ‘scientific’ is not a criteria that could be applied on a scale beyond specific observations, methods, or practices, and secondly because the characterisation of an ‘Age’ is necessarily a historical judgement, and not one open to verification in the required sense. Of course, this doesn’t rule out the historical judgement in question – but it cannot be a scientific claim in any conventional sense of the term.

So what about the historical judgement? Here, we still have to meet the requirements of evidential reasoning and the evidence is not very convincing. We would presumably expect to see evidence of widespread evidential reasoning in culture at large – something that would be very difficult to produce. Where we do find it – in law, for instance – the trend goes back to before the aforementioned Age of Steam, indeed before the Age of Enlightenment, so using this to characterise our time seems to be extremely misleading.

Not a scientific judgement, not a historical judgement, what is the basis of claiming we live in “the scientific age”? Like the Atomic and Space Age, this appears to be a purely rhetorical move, presumably one intended to contrast our time with an ‘Age of Faith’. But characterising even the Middle Ages as an ‘Age of Faith’ would be a struggle for any honest historian, and until the late nineteenth century the development of the sciences was a quintessentially Christian endeavour (although it was also underwritten by earlier Islamic scholarship, which in turn carried on the work of the ancient Greeks).

The point of claiming that we live in a ‘Scientific Age’ appears to be to continue asserting the alleged war between ‘Science’ and ‘Religion’, and to further imply that ‘Science has won’. But this is simply bad evidential reasoning. As I explore in The Mythology of Evolution, the cultural conflicts that are being spun within this rhetoric occur both within the sciences (e.g. over different evolutionary theories) and between religion and non-religion (e.g. over the theological and atheological implications of said theories). Frankly, it is a hopeless task to treat the terms ‘Science’ or ‘Religion’ as unifying in anything beyond the sketchiest of senses, and even if these generalisations are accepted we ought to take note of Stephen Jay Gould’s objection that there cannot be a conflict between two almost entirely disjunct concepts.

I can find no evidence that positivists, those whose non-religious faith is invested in the sciences, are better or worse people than religious folks. But I can provide evidence that they are alike in many ways, including the example that I have discussed here. Rhetorical tactics such as asserting that we live in “the scientific age” are essentially self-betraying; they do not uphold the evidential values that positivists justifiably venerate. We can gainfully compare this to the reprehensible tendency of some Christians to endorse torture and war against Muslims, thus betraying the moral values of Jesus’ teachings, which they are supposed to venerate, or for a small minority of Muslims to betray Mohammad’s teachings by murdering innocents. If the latter cases are notably more extreme, it’s worth remembering that some positivists have also supported this kind of horrific brutality, it’s just that they are not being overtly hypocritical in doing so, ‘just’ morally repugnant. Every tradition, alas, has its darker side.

What positivists, Christians, and Muslims all have in common is that they are all human. As Charles Taylor argues in his epic tome A Secular Age, one of the most unique characteristics of our time is the sheer range of beliefs and practices on offer, having fractured and diversified in the wake of what he calls ‘the Nova effect’, forming an (all-too-real) phenomenal multiverse. However, as the examples I have given above demonstrate, we could rhetorically dub our time an ‘Age of Confusion’, an era when faithful adherence to the values of any tradition has become increasingly hard to find, while our critical faculties are frequently numbed by the easy appeal of emotive rhetoric – especially when we get to valorise ourselves while denigrating others. If, like me, you think the practices of the sciences deserve our respect, you owe it to yourself to uphold their core values concerning evidential reasoning and not slip into the cognitive biases that flourish as much today as in any other era of human history.

The opening image is Density of States by Dr Regina Valluzzi AKA ‘the Nerdly Painter’, which I found here on her Wordpress site, Nerdly Painter (used here with permission).

Thank you for crediting my image and for providing a backlink. That's pretty much all that i want for use of images of my art in peoples' non-profit articles. If you ever decide you want to know why some of the atoms and moieties have halos, drop me a note.

Hey Regina,
Thanks for dropping by and giving me express permission. That means a lot to me. And I love your work! Hope this link helps bring more people to it.