There Is No Number-Base That Can Make Eleven Years Sound Important
A Study in Psylocke (2): Olivia Munn

A Study in Psylocke (1): Betsy Braddock 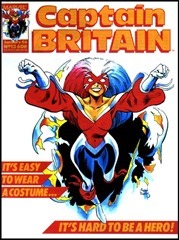 With X-Men: Apocalypse now leaving the movie theatres having pulled in decent box office returns but lacklustre critical response, the future of Olivia Munn as purple-haired mutant miscreant Psylocke is currently a matter of speculation. Here is a situation where the demands of adapting from a corporate megatext into a substantially more commercially valuable subsidiary megatext create subtle and awkward pressures. Psylocke, now a fan favourite in the comics, has a long and complex history that vastly predates her transformation into the Asian character that Munn was a fit for – and Betsy Braddock, who becomes Psylocke, was in no way Asian, and indeed, was resolutely and inescapably Anglo-Saxon British. What are we to make of this strange collision of ethnicities, and what can it tell us about contemporary megatexts?

Psylocke in the World of Marvel Comics

The choice of Olivia Munn to play Psylocke on the big screen is an act of casting genius on behalf of either Ronna Kress or Roger Mussenden, or one of their minions. Not only is Munn the spitting image of recent forms of the psychic knife-wielding fan favourite, the complex web of cultural forces bearing upon Munn’s childhood provide a plausible means of dismissing just about any ethnic argument that could possibly have been advanced against this casting decision. I wrote recently about Jon Tsuei’s objections to the casting of Scarlett Johanson as Ghost in the Shell’s Major Kusanagi as part of the Corporate Megatexts serial. The issue there was the casting of a non-Asian actress in a quintessentially Asian role, and the corresponding undermining of authenticity this engendered in the community around Ghost in the Shell. In the case of Munn’s casting, however, the Gordian knot that exists around Betsy Braddock provides no viable means for any equivalent complaint to be levelled.

But there is still a potential authenticity crisis surrounding the transferral of Psylocke to Fox’s cinematic adaptation of the X-comics megatext, and it is one that has been handled with either ingenious strategy or great luck on behalf of prodigal director Bryan Singer, the founder of the movie branch of the X-Men narrative tree. At its heart lies the problems entailed in taking a character whose backstory in the source materials is utterly unadaptable to a movie format, and which includes within it an ethnicity conflict that would have generated substantial furore had it occurred anywhere but pre-internet comics. Actually, that’s not strictly the case: there was an internet at the time, but it was largely only accessible to elite computer nerds, and it was substantially before its mainstream adoption, and certainly before internet nerds were a community with a power base that needed to be wrangled. Before we can adequately explore this topic, however, it is necessary to recap the rather strange biography of a character who had very little fan support before her transformation into ‘psychic ninja’.

Betsy Braddock debuts as part of the 1970s line up of comics published by Marvel UK. There is very little talk about this offshoot of Marvel Comics, which is unfortunate as incredible work was done by writers such as Pat Mills, John Wagner, Alan Moore, Grant Morrison and Dave Gibbons on the Doctor Who magazine (which, under a different publisher, continues today), not to mention in original stories never printed in the US for Star Wars Weekly by Archie Goodwin, Chris Claremont, Michael Golden and, once again, Alan Moore. But the lasting legacy of these unique British comics in Marvel’s superhero megatext is the creation of Betsy Braddock, who will eventually become Psylocke. Betsy, it should be clear is British… indeed, English, and a daughter of the aristocracy. Chris Claremont, writing for Marvel UK, added Betsy to Captain Britain (another UK-only title) in 1976. Her notorious purple hair begins as a dye in 1983, in a storyline by Alan Moore and Alan Davies, and she goes on to have a stint as Captain Britain in one fateful Alan Davies issue from January 1986 (pictured above), long before Marvel US took a penchant for gender-switching key characters. It ends badly for her, and she loses both of her eyes.

Claremont, never one to waste a loose end, rolls Betsy back into his run on Uncanny X-Men in the back end of the 1980s. In October 1986, nine months after Davies had left her blinded and broken as Captain Britain, Claremont and Davies remake the character via the second annual of The New Mutants, marking her first appearance in the US marvel comics, the creation of her new identity as Psylocke, and the changing of her natural hair colour from blonde to the trademark purple. The transformation is pure comic book hokum, and happens as a result of tinkering by Mojo and Spiral, two wonderfully peculiar extra-dimensional villains created by Ann Nocenti and Arthur Adams the previous year. But the strange creation of telepathic plot device Psylocke out of Betsy Braddock is dwarfed in weirdness by her metamorphosis into Lady Mandarin as Claremont’s contribution to the 1989-90 Acts of Vengeance crossover. Marvel’s bottomless bucket of ninjas, the Hand, somehow remake Betsy into a Japanese psychic ninja (later retconned to a body swap by Fabian Nicieza in 1993), making her one of very few fictional characters to have changed ethnicity. It is this that establishes the utterly English Betsy as now definitively Asian (specifically, Japanese), and kicks off a previously unprecedented popularity for Psylocke.

Psylocke in the World of the Marvel Offices

The circumstances of the ethnicity transplant that made Psylocke’s career are a source of tremendous speculation, and particularly because it involves one of the most pivotal writer-artist encounters in comics history. Many fans suspect that Korean-American artist, Jim Lee, who was the artist on the X-Men’s Acts of Vengeance issues, somehow pushed for the new look Psylocke. But this isn’t entirely plausible. Lee was 25 in 1989 and a virtual newcomer to comics while writer Chris Claremont was 39 and had worked on Uncanny X-Men for an unprecedented 14 years at that point. (Claremont’s work on these comics had vast influence on other writers, not least of which upon future nerd-god Joss Whedon.) Claremont and Lee had first worked together on issue 248, when regular artist Marc Silvestri wasn’t available, after which Lee returned to replace Silvestri for the three issues in question. Interviews with both have failed to reveal any way in which Lee influenced Claremont, and it’s unlikely he did: Lee was a newcomer and Claremont was a legendary veteran; at this point in time, Claremont would certainly have been in the driving seat.

Examining the construction of the panels in issues 256-258 reveal great attention to details that clearly come from Claremont’s plotting – such as detailed references to Betsy’s earlier life and the dream-twisted inclusion of Mojo and Spiral, all of which demonstrate connectivity to the longer narrative arcs Lee would have known little or nothing about. Clearly, Claremont was in control of the storytelling at this time, yet he would certainly have seen Lee’s sketchpad, and would have had a sense of the new artist’s strengths. It seems far more plausible to surmise that Claremont created the Lady Mandarin plot as a vehicle for Lee’s talents. Allegedly, Psyclocke would have reverted back to her Anglo-Saxon body soon after – but the popularity of the character as drawn by Lee was too great for a reversion, or for matters to remain the same as they had been at Marvel. Lee was soon signed on as the regular artist, and he (and other talented artists such as Todd McFarlane, Rob Liefeld, and the aforementioned Marc Silvestri) began to be recognised by new Marvel comics X-titles group editor, Bob Harras, as critical to the growing popularity of the franchise.

Psylocke thus becomes a symbol for the transformation of Marvel Comics at this time, precisely because her radically more popular post-Lee poster-art form usurps some of the narrative control from established writer Claremont. Claremont and Lee produce the first three issues of new hyperbole free X-Men in 1991, after which Claremont quits, citing a lack of support from Harras whose mandate was to keep their new hotshot artists happy so that sales could continue to build. The first issue of X-Men is the highest selling comic of all time – because Marvel printed five different versions of it, and foolish fans (including 19 year old me) bought every version, thinking they would grow in value like other number 1 issues in the past. Marvel sold 8 million copies, mostly five at a time to befuddled nerds with a sketchy grasp of economics. Afterwards, not only Claremont but many of the fans left because, like me, they felt manipulated and used, and no longer wanted to support Marvel’s lust for profits over storytelling.

Despite the compromises that Harras made to try and keep Lee and the other artists at Marvel, they all eventually broke away (in what has been dubbed, in tribute to the awful crossover names of the time, ‘the X-odus’) and founded Image Comics, a revolutionary artist-owned line of comics, which with the exception of McFarlane’s Spawn did not have a great deal of commercial power until Robert Kirkman and Tony Moore’s The Walking Dead in 2003. Lee may not have enjoyed tremendous success with his Image title, WildC.A.T.s (which always felt rather too much like a second rate X-comic clone), but his nearly limitless popularity with fans ultimately led to him becoming co-publisher at DC Comics in 2010, effectively taking the top job at Marvel’s biggest rival. (Bob Harras, who had joined Lee at his Image company, Wildstorm, was appointed editor-in-chief and Vice President at DC, seven months after Lee was handed his half of the crown.)

Through both her transformation and the circumstances surrounding it, Betsy Braddock, an obscure scion of long defunct Marvel UK, symbolises the transition of Marvel from comics publisher to media corporation, a change that reaches its apex in the Marvel Cinematic Universe. But before Marvel worked out how to effectively monetise their stories through making movies of their own, there was Bryan Singer’s hit licensed film X-Men in 2000. And that lucrative franchise extension is where Olivia Munn comes into Psylocke’s megatextual story.