A Study in Psylocke (2): Olivia Munn 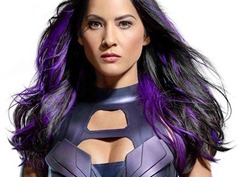 Last week, I discussed the circumstances surrounding Betsy Braddock A.K.A. Psylocke both inside the fictional world of the X-Men comics, and within the offices where her stories were created. This week, I want to pick up this megatextual odyssey by turning our attention to the big screen narrative offshoot established by 2000’s X-Men. After two successful X-Men movies, Bryan Singer walked away to direct the disappointing Superman Returns, leaving Brett Ratner to complete the original trilogy with the choppy mess that is 2006’s X-Men: The Last Stand. One of the bit parts in that movie is a mutant called (so the credits claim) Psylocke, played by Meiling Melançon. You could be forgiven for not connecting Melançon’s character to Betsy Braddock, however, or indeed for never noticing her at all. In a very practical sense, the opportunity to bring Psylocke to the big screen was still substantially open.

We come at last to Olivia Munn’s role in our story. She was auditioning for the role of Vanessa for Deadpool when somebody (nobody seems clear who) spotted the potential for Munn to play Psylocke in X-Men: Apocalypse. Another significant ambiguity is whether Psylocke had been written into the screenplay for that movie by this time, as she wasn’t originally part of the plan. Indeed, the Fourth Horseman would have been Xavier, a plan that began to feel hollow during production, since James McAvoy does very little in the final act of the movie beyond whinging. So a mutant character needed shoehorning into the story to make up the requisite number of minions for the dullest of all X-villains, Apocalypse. Whether because Munn had been auditioning for a role in Fox’s branch of the Marvel movie megatext and an opportunity was spotted, or because Psylocke had already been chosen to plug the gap in the story (which seems less likely), Munn was thus brought into the production.

This helps explain in part why Psylocke has so little backstory in the film, and very little to do other than provide another foe to fight in the rather flat final act. But the other side to this coin is that it would have been highly difficult to provide any context or origin story for Psylocke for the reasons explored last week: Betsy’s character is a clunky amalgam of three separate storylines,  the Captain Britain continuity from Marvel UK, the original Psylocke character that brought her to the US comics, and the Jim Lee-designed Lady Mandarin Psylocke who has lost all the vulnerability and ambiguity of Betsy’s previous incarnations and serves as yet another kick-ass anti-heroine to throw on the pile of scrappy new characters added to the X-megatext by the future Image artists (e.g. Gambit by Lee and Claremont, Cable and Deadpool by Liefeld).

Adding Psylocke to the already crowded story-space of Apocalypse must have presented director Bryan Singer with something of a conundrum. There wasn’t enough narrative space to do justice to the characters they already had, especially since Singer set himself the task of getting a solid X-Men team together by the close of business but had only Beast, Professor X, and Havoc left in play at the end of Days of Future Past. (I’m not counting Mystique, whose role has been utterly transformed in the movie megatext from second string villain to full-on heroine through the sheer popularity of Jennifer Lawrence). There was no plausible way anything substantial could be done with Psylocke. So what to do?

The first play in circumventing this problem was a stroke of simplistic genius: Singer announced Munn’s casting on Instagram by saying:

The key point here is that he announced that Munn would be playing Betsy Braddock, which was not strictly the case. The credits to Apocalypse report only that Munn’s role is Psylocke, which is also the only name that is ever used to address her on screen. So here we have a situation whereby if we take solely the movie as our source of canonicity, Singer’s announcement is either incorrect, or a lie. But of course, the ultimate source of all canonicity in anything licensed from the X-men comics are the comics themselves – these are always serving as subsidiary props in the background of the ‘games’ being played by those who are watching the movies whenever they possess the relevant background knowledge of the comics, a complex form of play I explored in “What are we playing with? Role-taking, role-play, and story-play with Tolkien’s legendarium”.

Playing with the Backgrounds

When creating high-profile derivative works from a corporate megatext, you have unusual choices. As long as nothing in the foreground narrative (the X-Men movies, in this case) contradicts an element of the subsidiary text (the comics in this case), the ‘players’ of the movie are free to establish the viable narrative connections in their own minds. So as long as Psylocke as presented as having plausible continuity with her comic progenitor, fans of Psylocke are free to inject her backstory into their experiences of the movies along whatever lines of imagined adaptation they want to apply. Movie-goers without the knowledge of the source megatext are excluded from this game, of course, but to them Psylocke is just another bit player in a film franchise that is packed with such throwaway extras – just look at first draft of movie-version Psylocke in X-Men: Apocalypse.

Now whether through agreement with Singer or just brilliant PR instincts from Munn or her agent at EBA (most likely through Munn’s own well-developed geek-sense), Munn takes the gift that Singer provided the fans by publicly announcing she was playing Betsy (rather than just Psylocke) and spins it into a brilliant piece of extra-textual play. For through a single press interview that was picked up and run through dozens of nerd-leaning internet news sources like Screen Rant, Collider, and Nerdist, Munn takes the foundation Singer had provided and builds upon it every possibility that could be used to support just about every game of canonicity-alignment any sufficiently interested X-nerd might want to play. Here’s a great example:

If Psylocke had a chance to tell her story, it would be great to start with the genesis… I think maybe like right as she’s getting out of university and before her whole family… We jump in right before all of her family is taken out and we have an understanding of what she had to lose. Then her figuring out he powers and how powerful she is. It’s something that I always loved about her. That she came from a good family and lost everything. Yeah, I would just like to tell that story.

Yet of course, if the comics canonicity was to be held faithfully, it would be essentially impossible for Munn to tell that story – for Betsy at this point is a blonde Anglo-Saxon aristocrat. And cast your imagination around how you like, you’ll not find a viable way for the first part of Betsy’s backstory to be comfortably converted to the big screen, nor for that matter for something as offbeat as Mojo and Spiral to be part of the events, nor for that matter the Ninjas-R-Us craziness of the Lady Mandarin story, whether in Claremont’s original form or Nicieza’s retroactive adjustments. Betsy’s story, in its most canonical form, is simply unfilmable. But Fox never needed to offer it on the big screen, because Singer and Munn had managed to offer fans a chance to play this game themselves, without creating any complexities for the film franchise.

In no way am I impugning Munn’s honour in drawing out this strange and wonderful side story that hangs ethereally off both the comic and the movie megatexts, bridging the two without ever having to establish anything substantial. Even if it is taken that the above quote invites the inference that Munn is falsely claiming to have read the Marvel UK Captain Britain stories (which she could not have done directly as they were UK-only) no US nerd could viably indict her since they too, like Munn, must have picked up this backstory from secondary sources, of which there are an endless supply of options, from trade paperbacks to internet databases. Honestly, I admire the way Munn managed to generate such incredible publicity from nothing more than the appeal of canonicity and the faithfulness of X-fans. I challenge anyone to find such commitment to a frankly minor acting role in any other corporate megatext adaptation ever.

But because of Psylocke’s canonical history, it would have been impossible for Munn to ever portray Betsy’s backstory without transforming it to the point that it was no longer canonical, thus breaking with the faithful community that care about such matters. All that could be done was to hold out a hope, a carrot of possibility, that would enable fans to create their own bridging stories in their minds. Precisely because storytelling with corporate megatexts concerns a manifold of practices, a set of different ways of drawing connections across impossibly distinct continuities, the satisfaction of the fanbase has become a vital corporate practice whenever adaptation is in play.

The management of the kinds of possibilities I have outlined here are now absurdly big business – a billion dollar business, indeed – and the risks of a misstep cannot simply be ignored or taken for granted. We geeks have a strange kind of powerful powerlessness: we were essential to the initial commercial success of any and all comics that come into contention for adaptation, and we are equally central to the hype-making and cross-megatext story-weaving practices that accompany transitions into television and film. Yet, we are also expendable, in the sense that satisfying the punters in the cinema or the binging box-setter is vastly more important to on-going commercial success than placating fanboys, fangirls, or other kinds of fan-entities. While it’s true that the corporations need us more than we need them, for those of us whose imagination and loyalty is bound to contemporary megatexts, the dependencies are far harder to unravel.

Psylocke is in only one x-men apocalypse for the first time!

Hi Carlos,
Thanks for pointing this out! Can't believe nobody (including me) noticed this typo. I have corrected the text.