No Man's Sky (Blog Letter)
The Best Thing About the Cover for Wikipedia Knows Nothing...

An open letter to Charles Cameron responding to his blog-letter No Man’s Sky at Zenpundit as part of the Republic of Bloggers. Further replies welcome! 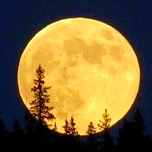 The second of my five religions, Zen Buddhism, came about entirely as a consequence of a famous tale you allude to in your wonderful letter. The library at the University of Manchester, where I studied until gaining my Masters degree, was a wonderful resource for me during my time as a student. Although I do not remember the details, I read something about the Last Patriarch’s teachings there, and it went something like this:

The nun Wu Jincang once asked Huineng to explain passages of the Nirvana Sutra to her. Huineng couldn't read, and he asked her to read the passages aloud. Astonished that the revered Zen master could neither read nor write, Jincang wondered how Huineng could understand the teachings. Huineng replied: “Words are not truth. Truth is like the moon, and words are like my finger. I can point to the moon with my finger, but my finger is not the moon. Do you need my finger to see the moon?”

I spent a great deal of time that night meditating upon the gloriously full moon, a little about my finger, and a great deal about the space in between. Space. The space between. The space beyond. When I could be any or all of these, I went to bed. I thought to myself: How arbitrary it is that we should see ourselves as the finger, and as not-the-moon, when we might just as well consider ourselves the spaces in between – since without that, we could never be not-anything!

This lunar encounter served me well until about five years later I hit a terrifying crisis of identity when I lost faith in any ability to use words to communicate at all. I began to fray at the edges… If everyone’s words were their own symbols, how could we ever manage to communicate? Did we? Or were we just braying at each other at random, each one watching a different play on the stage we had been thrown together upon? I was a practicing Discordian at the time, getting my religious community fix from a cabal of strange and wonderful folks who had come upon the journey into chaos with me. We were all wrapped up in our own strange adventures. That was always the risk of leaving the clearly marked paths behind… of being set adrift, becoming a nomad. And we are all becoming nomads these days.

With a flair for the Biblical inherited from the time when Christianity was my only religion, I spent forty days and forty nights hitchhiking across the country, staying with friends. Upon my return, I left Manchester and moved to London, where I began working as a professional videogame designer. I had the honour of working with Sir Terry Pratchett – although not a knight of the realm in those days! – and indeed spent a launch party sat next to him and his agent, Colin Smythe, having a marvellous chat about writing and publishing. Alas, I was young and cocky, too arrogant to truly appreciate how much that night was to come to mean to me. My first book came into print soon afterwards.

Years later, Wittgenstein helped me make sense of my problem with words. He was long gone, of course, but he left his words behind, which meant I could listen to him even if he could not hear me. He made clear how words could be understood as belonging to the many different games of language: the meaning of the word was its use within the game it was deployed within. (“I don’t buy that” means one thing in a courtroom; quite another in a shop.) That meant if you wanted to be sure you were using the words correctly, you had to know which game you were playing. That’s precisely the problem with what you call the God NoGod argument: two very different games are being played that just happen to have identical rules. But once you realise that, once you take that idea aboard, you risk being set adrift from living life in one particular way – you risk becoming a nomad.

Peter Lamarque, perhaps Britain’s greatest living aesthetician, awoke in me a whole new way of riding Wittgenstein’s thought when he expressed how beneath it all was the concept of a practice, of lived practices. At which point, Isabelle Stenger’s idea of an ecology of practices, as a manifold of games, or (as I put it in Chaos Ethics) a multiverse, was the only way to understand our mutual predicament. This multiverse, or pluriverse as William James also puts it, is an idea I develop from Michael Moorcock, who – rather amazingly – is also origin of the use of ‘multiverse’ to mark the physicist’s imagined plurality of universes, a quaintly nontheological reverie if ever there was one. Yet at least one of my Discordian friends speaks of having personally experienced this physical multiverse… Should I treat him differently from those who speak of God, or the Goddess, or even of the Universe? What does a nomad do confronted with any singular way of being? What kind of reply is: there are other ways…

Thank you for the letter, and your continued friendship, albeit of the nomadic, disembodied kind where we have never met in the flesh. I place more stock on flesh these days, but then, I also have a great deal of faith in words.

Any and all replies are welcomed, whether in the comments, or via a blog.

I spent a good deal of my student time at Oxford hanging out at the Anscombe house. More when I respond on Zenpundit.