In this latest dialogue between philosopher and Nietzsche scholar Babette Babich and ‘outsider philosopher’ Chris Bateman, we discuss our relationship to corporate power and influence, the possibility of virtuous behaviour against a backdrop of pervasive technology, and living with robots. 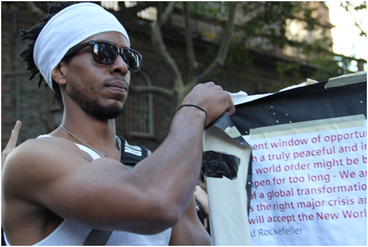 Chris Bateman: In your book The Hallelujah Effect, you draw out some of the ways that our apparently freely motivated actions in social media tend to devolve into propping up the corporate ownership of popular culture. Web 2.0’s much vaunted appointment of the masses to the role of ‘content creator’ becomes a kind of ‘free range egg’ alternative to ‘battery farmed’ corporate content creation – the content we ‘create’ is an unpaid corporate promotional service. You suggest this is the new venality, a corporate venality where we are effectively being psychologically ‘bribed’ to prop up corporate interests. And we all end up participating – even those of us who question this arrangement. Is this inevitable? How would someone find a virtuous path in this situation?

Babette Babich: This is a great question.

This is such a great question that I would be up for anyone who might suggest such a path out of the fly bottle.

I don’t think such a path exists, or at least and surely not without critique, which is why there is a need to focus on Adorno (even if Adorno’s tone can annoy a lot of readers, Horkheimer does not make it any better) or Günther Anders (part of Anders’ 1956, The Obsolescence of Humanity, “On Promethean Shame” is now available in English as part of Christopher Müller’s Prometheanism) or Marcuse or indeed Baudrillard. The problem is that as happy denizens of the capitalist world view, that is, as happy consumers dedicated to feeding the corporate machine all the gigantic profits it can eat, that the dynamic is just as self-detonating as Marx suggested long ago and as we have, quite empirically found, to our great distress, bubble after bubble, in the UK under Thatcher and since then, as if no lessons had been learnt, and they weren’t, and on-going again with Brexit and its subsidiary consequences.

CB: On Brexit, I shall have to defer comment, if only for brevity, although it is something I spend time quite some time thinking about, and remain quite conflicted.

BB: Let me also note – although I am mindful of the complexity deferred – that academic authors are perhaps more insulated from the same profit question though no less involved. I was just interviewed for a UK job (patently I was not offered the position or I would not be talking about it, and that complicity is worth a blog of its own) where I was asked point blank about just how I planned to bring corporate money to the university: I have no such plans or techniques for the same, and I said as much.  What I did not say was that I thought that the very idea violated academic integrity.  And yet there is no way to be an academic and not be involved with corporate money, corporate enhancement, corporate exchange, whether one intends this or not. Thus just to limit this complexity to something as seemingly innocuous as research – academics routinely write (and edit: recruit, and collate for journals and book collections, reads copy: one’s own, that of others) for no compensation, before, during, or after publication. Yet most academics who write for the sake of communication and engagement, the furthering of research, also vigorously protest file-sharing – a complex issue on which you have written and which remains very resistant to analysis at any level. Maybe this is because the digital ontology of our lives is happening, or unfolding, all around us.

CB: You say ‘corporate machine’, and ‘machine’ was specifically the metaphor Ivan Illich used to describe the way that Western society – the democratic, free market economy, rights-claiming ideological system – functioned, and he tried to warn countries that had not yet been pulled into it what they stood to lose. Because it seems, as you suggest here, that once inside there is no way out, no way back, because once you join an economy of specialisation and dependence upon manufacture and commerce you can never be self-sufficient in any tangible sense. The moment you are not growing your own food, the moment you lose those skills that once were the mainstay of existence, you are entirely dependent upon the system to sustain you – and the system now is the corporations just as in feudal times it was the aristocracy. Feudal capitalism would be another way to see it; millionaires swearing fealty to billionaires, and the peasants in thrall to their employers who – whether by bank or by capital investment – all depend upon millionaires or billionaires somewhere down the line. BB: It was Illich’s metaphor and it still bears reflection, as I often connect it too to the Frankfurt School theorists and their culture industry.  I write occasionally  about Illich in connection with education and health care but I think his comments even more vital in connection with what he called conviviality, and this complex feudality is, I think part of that as we live semi-blind to the system that sustains us, as you say, and corporate feudality is a matrix all its own. Illich pointed out that what is at issue is more than the preservation of exotic cultures, Carmen Sandiego style (where in the world can one be free of corporate control?) if only because as he also argued, there is no place, to one side or the other of Brexit complexity or Trump wall-building insanity, where one is or could be free of corporate control.  Illich’s writing and sensibility has, if one opens oneself to reading him, the capacity to raise the tone, to remind us of conviviality, that we are very much in this together even if we need the spirit of an almost-saint, as I believe Illich was such, we certainly need the patience of one, even to pose such questions at all. Hence toward the end of his life, talking about his decision to shut down the centre he himself had founded in Cuernevaca, Illich spoke of the “cultivation of conspiracy,” meaning, as he gave a historical as well as etymological discussion, being close enough to others that we might be able to share their breath, to breathe with them. “Con-spiratio.”

CB: Finding Illich was transformational for me, because here were precisely the questions not being asked today, and (soberingly) being asked around the time that I was born. Having taken these questions to heart, though, I have felt remarkably isolated – because to think with Illich is to exile yourself from almost everyone else today, to challenge everything that most people unquestioningly take to be the best aspect of what we have (whether education, medicine, or transport). Worst of all for me is precisely that I do not feel close enough to others to share breath – far from the delight in my nomadic existence that gave me my company name (International Hobo Limited), now I feel an acute sense of the costs of that nomadic existence, but the habit is there now, and it is terribly difficult to break… I had not thought, before you mentioned it, of this other meaning of ‘conspiracy’, shared breath, but yes, I suppose I yearn for a conspiracy I feel able to belong to!

BB: Historical philology is captivating and one learns from Illich’s account, but you mentioned him to touch on the question less of spirit (and Illich’s conspiracy) than speculation and capital, specifically our unwitting involvement with it, an unwitting involvement that tends to become quite witting. Most of us at university will seek corporate sponsorship if we can. Hence a nearly universal response to Illich on breathing the breath of others – he was speaking of the original meaning of the kiss of peace – can be the same as a fairly universal response to Žižek in the time of Occupy Wall Street (I include here some of the photos I took of the movement, during a day of organized protests, with union support from all over the New York seaboard and mindful that Occupy has in the space of a few years passed into a cliché for a thoroughly defeated movement) as Žižek suggested then that we might, say, dismantle capitalism, that would be the ultimate Brexit. As is his wont, Žižek articulated our own answer for us in effort to get us to think about what we consider, this is a Lacanian conundrum, what we regard as or name the impossible.

The dialogue continues next week: Monopoly and Other Games