Last week, the tyrannosaur’s hands. This week, philosophers Babette Babich and Chris Bateman talk about hands upon computers and the illusions of interaction. 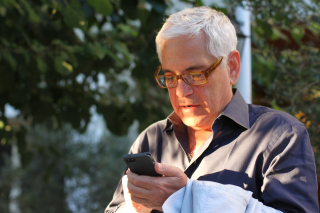 Babette Babich: The German name for cell phone is ‘Handy,’ which seems to be because having hands means we like to have things at hand, and we like to do things with our hands – pretty much all the time.  And this is ubiquitous: here I include a photo of the Princeton philosopher Alexander Nehamas, taken in Athens at the last World Philosophy Congress, consulting with his cell phone.

Chris Bateman: I recall how uncomfortable I became thinking about whether my hands were or were not in my pockets... bringing this to my conscious attention as a late-teen made me ask questions about what I was doing with my hands, and why.

BB: Once upon a time, part of growing up was learning what to do with one’s hands: meaning nothing whatever. There were pockets but one wasn’t meant to have one’s hands in one’s pockets. Briefcases and handbags but one also was not meant to be rummaging around in them. And books, but then, in the company of others, except among strangers on a train of course, and so on, or in school, but in a meeting, during conversation, one was to use one’s hands to hold the book, without fidgeting and without reading it.

CB: The book, more than anything in my childhood, was the primary thing my hand was holding. Now, although I still read a great deal of books, the thing more often being held in my hand is a smartphone, or as I like to call it a ‘pocket robot’. And there’s a strong parallel here, because I used to read books as I walked down the street to work (a skill requiring considerable practice, and requiring strong peripheral vision if you are not to step in something untoward!)... for some reason, walking with the smartphone in my hand bothers me more than the book did – and I don’t really know if this is because of differences in the experiences of book versus robot, or because I have changed in the almost twenty years between. In both cases, for me, the item is an escape for me, out of perceptual reality and into the theatre of my mind – and in this, as Graeme Kirkpatrick pointed out in respect of videogame players and their controllers, my hands are out-of-mind. The smartphone, perhaps, makes it harder to ignore our hands than the book did.

BB: Pocket robot! I love this expression, because this personal robotic dimension is very surely part of the reason we are addicted to our phones! And the peripheral vision challenge is part of the allure of Pokémon Go, I think we will see more enhancements to come beyond Pokémon reality ‘skins’: imagine, and I know you are better at this than I could ever be as a game designer, but if one could outfit the world around one at will, say, dressing people on the streets in medieval garb?  What fun!  A personal holodeck to be configured at will. At the very least it could improve a blind date experience, maybe best without the other person knowing about it.  Augmented reality, Miniver Cheever style! I defer to your judgment, but I can’t help wondering if the controller is not also a technological extension of the hand, just as we manage to use our keyboards that way, have for years… and I will bracket the comparison to Athanasius Kircher à la Siegfried Zielinski just to get back to analytic philosophy’s own preoccupation with hands, think Peter Godfrey-Smith and his octopus mind. CB: You absolutely correct, the game controller functions as a prosthetic hand extension, indeed, I should say, game controllers, as these too went through something of a Cambrian Explosion in the early arcade – trackballs, the myriad buttons of Defender, toy guns, joysticks from lollipops to aircraft yokes – before steady commercial pressure stabilised the twin stick controller that is the standard form for most game-literate players today. As VR comes in now, the pressure of the channel dug by this comfortable design now becomes a problem, for players have learned that their right hand adjusts their view (and most players are not conscious of this while doing so because it is habitual), but with a headset to dump you into the visual field now the neck must be used instead. The result is both confusion, because the hand has learned and doesn’t rapidly unlearn, and disorientation, even nausea. I think of Wittgenstein’s ‘if a lion could speak, we would not understand him’, and think this might apply to our own hands.

BB: The Wittgenstein connection (although I also make the case with reference to Merleau-Ponty) is central – think of Wittgenstein’s On Certainty. Our hands are part of the way we communicate to others.  The genius of the single, so-called gesture-enhanced or multi-touch modes, is that the desire to use our hands plays into this, and is part of what can count as ‘intuitive’ design. Think of dating apps, swipe left (or right). In each case, with or without the app, our smartphones and tablets let us touch, worse yet, they require us to do so, in order to use them optimally, not that all of us do. But, and this is the phenomenological take away, owing to our hand involvement, we cannot but interact with our devices: we are not merely using them to talk to others, we are talking to them, and they are talking back. One of my students at Juilliard (you will recall that they were all ‘kind enough’ to make some comments on the last blog, ‘required’ as you pointed out that these comments were), wrote a term paper on the phenomenon of autofill (and the point appears in one of the comments). This is the talking back that is autocorrect, the autofill completion, not necessarily qua response as much as an opting in to a replacement, whereby autofill speaks on our behalf. This is clearly the future and at the same time we have been opting in to allowing our machines to speak for us ever since we started using typewriters (this is a Kittleresque argument, who in turn borrows from Nietzsche and other early adoptors) and answering machines, allowing the machine to intercede for us, to take messages as a secretary would in our absence and not less in our presence, screening calls on our behalf.

CB: Absolutely, we are talking to our machines and we are simultaneously ignoring them, just as it was once (and not all that long ago) acceptable to instruct black servants without ever thinking of that as conversation, or even in many cases to think of them as people. This righty shocks our sensibilities now that the issues of race are almost painfully and embarrassingly in focus, and while I am highly doubtful of a similar revolution in moral perspective happening with respect of computerised devices (which are nowhere near sentience, contra the late Justin Leiber), the time will come that they too will come into view. One of my principal philosophical interests at the moment is our relationships with our robots, and the ways that we dismiss the significance of this. Because, to give a simple example, when our robot summons us with a chime, we take it in hand and respond to its summons (Hegel’s Herrschaft und Knechtschaft [master and servant] again...). But this chimed summons will interrupt our engagement with others around us; it takes us out of our social space in a way that feels very different to the people who watch it happen. I have found, since first having this come to my attention, that it is an oddly shocking situation that those absent-and-distant people, when mediated by a robot, are perceived to deserve more respect than those present with us.

BB: Telephone obedience, quite Pavlovian, corresponds to the compulsion we feel to respond to a ringing phone, chime, or beep. The mischief is, the problem is thinking that we are really interacting. Thus if someone designs a really excellent sex robot, and it meets the Turing test that we have yet to devise, call this the Pinocchio test: a cartoon or a fairy tale that tells us that if there is a difference (more Leibniz) that makes no difference, we have attained godlike powers or what is just as good, an ideal companion, Galatea (and of course Galatea is Pygmalion’s male artist’s ideal of an ideal woman). But note that just that ideal would, for some folk, be an ideal friend: this would be, and now we can go back to Aristotle, someone who is everything we wish them to be, who responds as we would like, when we like, just as long as we would like.  This could be an ideal chess partner or, if we can multiply players, the perfect rugby match. Maybe we can get a real-life version of Monty Python’s Philosopher’s Football. Or, beyond a gaming partner, and this seems to get the lion’s share of attention, for obvious reasons, there was an entire conference at Goldsmith’s just before Christmas, just a month ago now, on robot sex – I wrote a small essay for the occasion on ‘teledildonics’ – or to be vanilla about it, and Hollywood has already gotten there first with the film Robot and Frank, just a companion for one’s elderly relatives in need of a caretaker. 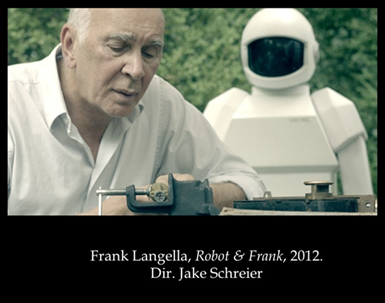 CB: That we would happily mistake a robot for a person at least strikes me as a superior mistake than to mistake a person for a robot or, as sprang mischievously from Descartes view of animals as clockwork automata, to fail to see an animal for a being. And here is an ironic end to a story that spans four centuries, because from mistaking animals as automata we now come to mistaking automata as people – a situation not entirely helped, in my estimation, by reducing everything to objects or (which amounts to much the same thing) telling people they are only an illusion. If I pretend that we can reduce all things to one kind – call it object, or unit, or body, or whatever – it only brings into clearer relief for me the differences between beings and things, which helps demonstrate how the idea of subjects and objects that descends from Descartes through Kant holds such force, even today. Yet the smartphone and other robots are the things that feel most like beings, because of their capacity for independent function. A robot, quite unlike a watch, is fun to be with.

The dialogue continues next week: Your Plastic Pal Who’s Fun To Be With

Hi dmf,
Many thanks for sharing this video! I'm an online video curmudgeon and watch next to nothing in this medium, but I used it as a springboard to look into Andy Clark's work. I have a lot of time for extended cognition, and am well-conditioned to recognising things around me as prosthetic. I like to call my philosophy notebook "my prosthetic brain." :)