Tip of the Cyberg 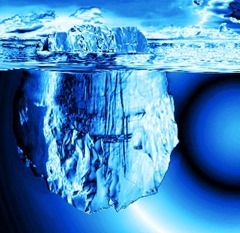 Does technology simply increase human capabilities? Or have we radically misjudged the extent and complexity of the ever-growing abundance of tools around us?

The astonishing advances in technological prowess in the prior century or so give an impression of infinite capabilities – the closest secular thought gets to imagining omnipotence. Thus we have no difficult envisioning (if we suspend critical judgment) techno-immortality, sentient robots, or interstellar travel. Indeed, science fiction is replete with these imaginary grails. This way of thinking about our tools – as personal enhancement – radically misleads us in several important ways (many of which I discuss in Chaos Ethics), but perhaps the most striking is the sense that equipped with any technology we act autonomously. This is always a subtle deceit.

Science fiction helps bring this confusion into focus. In Star Trek, the communicator, universal translator, phaser, transporter, and tricorder all do one thing perfectly (except when drama requires otherwise), to the extent that a Starfleet officer equipped with these things can appear anywhere, talk to anyone, scan anything to know what it is and what condition it is in, and – when push comes to shove – stun or kill on demand. All these capabilities occur literally at the push of a button. Where do these miracle tools come from? How does they work? It doesn’t matter; it’s high technology (hi-tech) – which is strikingly parallel to the magic-laden worlds of high fantasy. Arthur C. Clarke’s adage that any sufficiently advanced technology is indistinguishable from magic should raise more questions than it does... even in the context of sword and sorcery, we are entitled to ask: where does the magic come from? What is expended when it is used? What are the unseen limitations to its usage?

In the Terminator movie franchise, mankind in the future has been driven to the brink of extinction by robotic killing machines humanity made without thinking. That much of its setting is not hard to believe, particularly when you see the effortlessness with which the armed drone made battlefield honour obsolete. Yet against the backdrop of a total collapse of civilisation and killer robots prowling everywhere,the Resistance movement in the future depicted by Terminator: Salvation somehow maintains safe houses, feeds the survivors, even operate fighter planes. The aeroplane sits in our mind like the tricorder and communicator – autonomous once paired with a human. But as Bruno Latour never tires of reminding us: airplanes do not fly, it is airlines that fly. In stark contradistinction with what we see in a Terminator movie, no plane takes to the air without their logistical supply chains bringing fuel, their air traffic control networks managing flight paths, their support personnel performing essential maintenance.

Technology is not magic, and even fictional portrayals of magic are not as autonomous as we imagine our tools make us. There is a stark difference between hammers, binoculars, and a wind-up torch on the one hand and computers, cars, and airplanes on the other. While both sets of examples are manufactured by complex meshes of people and things, the latter list also require a complex network just to operate, a point brought into clear focus by the actor-network theory developed by Michel Callon and Bruno Latour. If a cyborg is what occurs when an organism is cybernetically enhanced by a tool like a hammer, we can call the network that produces and maintains the more complicated cyborgs like cars-and-their-drivers or computers-and-their-users, a cyberg.

The iceberg famously has only 10% of its mass above the waterline, and thus only its top is visible to the casual observer. So it is with the cyberg – the cybernetic network required by the more convoluted of our technologies. We see only the cyborg – the car and it’s driver – and not the cyberg that makes it possible. When it comes to technology we are perpetually shallow sighted: we see only the ‘surface’ of the network, so flat that it can be expressed as a one-dimensional array or list (car, driver, fuel, road). If we manage somehow to become more deep-sighted, we can recognise the relations and dependencies that give the cyberg it’s network-qualities (ore mines, smelting mills, factories, oil rigs, refineries and far more besides). These dependencies rapidly become tangential and obscure: an oil rig has scuba divers who repair the metal structure when it corrodes with arc welders entirely unique to their profession, but who is deep sighted enough to think of the factories making hyperbaric welding kits or compressed air tank regulators when looking at a car?

It is the cyberg that defines our technological situation, more so than the scientific research projects that we (somewhat naively) see as feeding directly into new tools, like the magician conjuring a new alchemical potion out of thin air, having expended nothing but time. What is more, we can measure our depth into cyberg existence by looking at the numbers of people and things involved in the cybernetic network. A hammer made a millennia ago involved a miner and a blacksmith, a mule and a horse, a mine, a furnace and trees; no more than about a hundred beings and things were entailed in this early cyberg example. A functionally identical hammer today would entail a network of ten thousand beings and things, or even a hundred thousand.

Our cybergs get bigger, deeper, wider, and as they do our autonomy recedes even while the imagined scope of our autonomy grows. This is part of the technological blindness I have previously called cyberfetish and am here marking as shallow-sightedness; our strange capacity to see only the powers and potentials of our new tools, but to overlook or underjudge their consequences. Precisely because we have moved from tools that could be made by individuals or villages to tools that require nations or corporations to build and maintain, we live at a time where the cyberg is the measure of both possibility and catastrophe.

Although I have introduced the idea of a cyberg through the extended frameworks behind a specific tool, the concept behind these cybernetic meshes applies whenever beings and things are linked together into extended networks. When Benedict Anderson observed that the printing press allowed the imagined communities we call nations to form, his argument can be read as saying that nations are cybergs. Every corporation is a cyberg, constituted slightly differently from nations, but in the last half century rivaling and exceeding them for power and influence. Every one of us is embroiled and imbricated in cybernetic networks of such scope and influence as to make a mockery of our mythos of technological empowerment. For when it comes to our tools, the enhancement of our personal agency is truly just the tip of the cyberg.

An interesting expansion on your cyborg treatise. There is no doubt that our tools and machines define us as much as we define them. A network of such tools would add more complexity, capability, but also more potential for breakdowns.

It's the human fallback mechanism to invent reality when circumstances change or simple human-impishness that has me question that a cyberg singularity will be that much different than what we have now.

The interrelation between humans and their tools is, of course, the point of drawing attention to the 'cyborg', and the cybernetic network I trace here (with a huge debt to Callon and Latour) is an important part of the nature of that situation. My key interest, in terms of technology ethics, is the vast gap between the mythos we tell about our tools, and what this obscures... I try to draw out a little more of that with next week's postscript 'top ten'.

This is important work you are doing! It naturally follows your past efforts and your game design background.

The technologists will want to tell everyone that AI or VR or AR is the next big thing. They need to since their reputation or money supply depends on it. So I think it will take some effort to demonstrate that while the aesthetics have changed, the tools and outcomes have not. 'Nothing new under the sun...'

Hi Chris,
VR has been a fascinating spectacle, watching the game development community scrabble around trying to solve an interface problem that is (I suspect) essentially insoluble, just because investors have latched onto this technology as 'the next big thing' (as you say). I've seen this before with social (=viral) games, episodic content (which worked for Telltale - and no-one else!), mobile games, online integration and so on. It's the investment merry-go-round. As a consultant, I am always having to ride the waves of investment fashion...

I'm not sure if there is 'nothing new under the sun', though... it is, of course, a matter of perspective. As much as I like to stress the continuity between games today and games millennia ago, I do think that we are facing new problems with technology today that do not parallel earlier situations as well as that phrase suggests. But then I look into the history of crossbows and see in it the echoes of drone bombings and think that, perhaps, what is changing is only the scale of the problems and not their essential qualities.

Thanks, as ever, for your support!