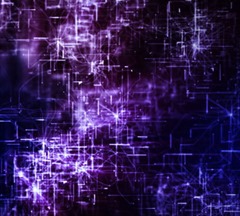 Every purposeful network of beings and things forms a cyberg, where (like an iceberg) we only see a fraction of the entailed network and the rest lurks beyond our awareness most of the time. The complete inventory of beings and things entailed within each of these cybernetic networks would be challenging to enumerate, but we can approximate the scale of each cyberg by counting just the number of one kind of entity within it e.g. the number of humans, the number of computers.

To qualify as a cyberg at all, we must be dealing with a network that spans its entire breadth with some kind of active relation, even if merely one of potential. A nation is a good example: not every citizen knows every other citizen yet they are linked by a shared bureaucracy that integrates them all into one functional network. It is not enough for there to have been a common network of production – no matter how many people own a penknife, penknife-wielders do not have any ongoing relationship. Conversely, the exchange of media effectively links television stations and thus viewers such that while individual TV stations are modestly sized cybergs by contemporary standards, they aggregate into something far more substantial. (Religions are something of a borderline case in this regard, but I shall set these aside for now.)

In the list that follows, cybergs are listed in order of the size of a single indexed entity, either humans or devices. Everything listed is a gigacyberg, with no fewer than a billion entities embroiled in its network. This list is not intended to be definitive but merely indicative – it points to the general situation today from a perspective we would not normally consider.

A number of megacybergs narrowly missed the top ten, including the European Union (743 million), movies (about 800 million), and guns (875 million). More than 360,000 people die each year as a result of the gun cyberg, but this is by no means the most fatal of our cybernetic networks. If this list included religions, Christianity would be the number three gigacyberg (2.3 billion), Islam would be ranked jointly with Microsoft (1.5 billion), and the Hindu traditions would be a close runner up (900 million).

Chinese internet giant Tencent and search colossus Google both have about a billion humans in their cyberg. Whereas Tencent does not lead Chinese search (that honour goes to Baidu) it has a tremendously diverse network of internet services, including the wildly successful competitive game service League of Legends. Google dominates search globally – but even this only allows it to squeak into the world’s biggest cybergs if we take its quoted figures as accurately gauging its scale. Pragmatically, the reach of the Google cyberg is probably greater than this conservative estimate – but it feels somehow fitting to show this young upstart beginning its climb towards the top of the heap...

It is possible to drive completely around the world thanks to the extent that the car-human cyborg has emerged as the dominant lifeform on our planet. We have completely changed the ecology of almost every ecological biome by installing the infrastructure required to make cars a viable form of transportation. This is the world’s deadliest cyberg, taking more that 1.25 million human lives annually, and that figure does not include war deaths some would attribute to the oil industry that feeds this network.

The only nations to qualify for this top ten list, India and China each have more than four times the population of the United States, and nearly twice the population of the European Union. China is the wealthier cyberg, with an economy four times the size of India’s, but both wield significant destructive power via their hundreds of nuclear weapons. However, they have less than 2.5% of the world’s nuclear stockpile, since the US and the Russian Federation hold 45% and 48% of the world’s nuclear weapons, a quantity far beyond any rational consideration.

Despite no longer being the centre of attention in technology circles, Microsoft’s cyberg is 50% bigger than the certifiable size of Google’s, thanks to the continuing dominance of Windows, which has a 90% market share in desktops and laptops. That said, these are now only 20% of the robot market, which is dominated by smartphones (where Google enjoys 87% of the market). Microsoft is a cyberg in decline, unable to adequately break into the pocket robot marketplace, but jealously guarding its hold over other industrial cybergs.

That television enjoys only a marginal numerical advantage over Microsoft is a sign of how completely the computer has has positioned itself as the cybernetic successor to the notorious boob tube. Yet there is another lesson here: the television is not ubiquitous, being a cyberg that extends through only 20% of the planet’s population.

Here again we get a sense of the power of the digital cybergs... it has taken a little over a decade for Facebook to become the first definitive 2 billion human cyberg owned by one corporate entity. By leveraging human social instincts – and largely by accident, for it was not originally designed to operate as a surrogate for relationships – Facebook has aggregated more humans into one walled garden than anything else.

It is distributed, beyond outright control (but certainly open to influence) and is the largest electronic cyberg on our planet. The internet... so significant, most dictionaries think it deserves a capital letter, like a nation. But this is a cyberg on a scale beyond national bureaucracies, a network that links half the planet’s humans to almost all the planet’s computers. Cisco claims there were 8.7 billion devices connected to the internet in 2012. As cybergs go, this one is the most spectacular in scale and potential. Yet it is still arguably outstripped by at least one larger cyberg...

This was the first cybernetic network, the first technical system to spread around our planet as both practice and tacit relations. As humans have grown more populous, so too has money spread with us – including into the virtual spaces of the internet, where this cyberg now lives as much or more than it does in the pockets of its humans. It seems positively simplistic next to the other gigacybergs, yet it engulfs almost every human; I have estimated that only 1-2% of the population of our planet are not caught up in the commercial cybernetic system. The sheer ubiquity of money as a concept is so complete that politics hinges more around budgetary numbers than about questions of how to live. This is one of our first technologies, as old as civilisation – and it remains our most successful.

I've posted a response via my personal blog to this:

Thanks for your great discussion points.