Babich and Bateman: Your Plastic Pal Who's Fun To Be With 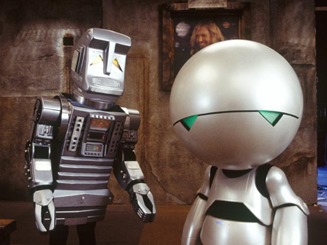 Babette Babich: I think that such robot “friends” [mentioned last week] are coming soon, if I also expect to be underwhelmed by them, just as I was underwhelmed by the realism of most realist game designs (I am mindful that you have worked out an aesthetic for this and as an informed aesthetic can make all the difference, according to no one less than Adorno, I am hoping to learn enough to have this either resolve or else to help me deal with my disappointment).

CB: Gamergate is such a spectacular example of our current fault lines in thought and our worrying inability to communicate... I have chastised both ‘camps’ publicly, for what little it means, and I so wish that the videogame civil war had led to a productive discourse instead of this divisive hate-fest that failed to achieve anything positive. Microcosms everywhere, I suppose, of the larger problems.

BB: Given the current hyperbolic politics of the unreal (and there are elements of the unreal in Brexit and in Trump , and the more standard journalistic language of ‘fake news’ and post-truth) a great many of the standard conventions or givens, the “supposedly ‘real’,” may be up for grabs. The talk of post-truth is complicated and emotions run high. When Steve Fuller made the very modestly intentioned (so I read his) observation in The Guardian at the end of 2016, “Science Has Always Been a Bit ‘Post-Truth’ ”, reaction on social media was both uncomprehending and antagonistic.

CB: He draws against Kuhn, which I have also liked to do at times (or Foucault, as the mood takes me, as I am one of these people who likes to draw the parallel lines there). But I think Latour’s critique here has a few additional teeth: Boyle’s vacuum pump and Hobbes’ Leviathan mark an epic moment where the split into subject and object, which I like to link up with Descartes and Kant as well, creates the ‘modern constitution’ and the assignment of authority to the State for subjects and the sciences for objects... and precisely what is revealed by ‘post truth’ is that the cracks in this problematic division have become so wide that it is no longer just the academics who are having to face that there is a crisis with what we mean by truth, a catastrophe for which Nietzsche was especially prophetic. It’s suddenly, and quite unexpectedly, drawn my own philosophy into dealing with epistemology, which is what Wikipedia Knows Nothing was all about.

BB: Part of the problem may be the durability of barefoot empiricism as the philosophical greybeards of my youth used, very condescendingly, to say, but another part of the problem is the brute difference between social realities and references to the supposed real world, just to stick to the reference to the ‘real’ dimensionality of the real world where being able to go barefoot and not being able to do so, for whatever reason – think of Socrates’ idyllic example in the Republic – makes all the difference in the way we talk politics of climate change, people present and unpresent at presidential inaugurations, all of which is window dressing when it comes to questions of reality and real world practice. Thus the Dakota Access Pipeline, which was massively protested, and which seemed to have been successful, is indeed proceeding apace: as of today, the protest camp has been ordered dismantled and ABC news is confident enough to tweet that it will be finished “and ready to flow oil in as soon as two weeks”. Beyond the ongoing business of mainstream media and “fake news”, to me, it is the disconnect with real world ‘reality’ that matters and the same people who frack and plan disastrous pipelines and hedge fishing models to permit greater quotas also tend to be people who do not live adjacent to fracking fields or alongside said pipelines.

CB: The NIMBY problem: ‘not in my back yard’.

BB: This means that one can talk about ‘real’ space travel and ‘real’ space exploration but ignore the more paltry results of the same real science. China lands a rover on the moon in December 2013 and we see and hear about it for how long and under conditions scientists name ‘mysterious’? We have wonderful images of the outer planets, but NASA enhances each and every one of them. Will a later generation manage the rendering of the same data differently, ‘enhanced’ in different ways? But your point is a powerful aesthetic-moral one, deserving a separate discussion. What should count as realistic? I once wondered in print about the realism, so-called, of Myst, and the realism, so-called, of Avatar, My own conviction is that this realism, here I am in accord with your observations, depends entirely on a selective focus. In art, supposedly ‘realistic’ styles present considerable variation over the centuries and not less across cultures. This is also the question when it comes to supposedly realistic robots.

CB: ‘Realistic’ here standing for the ease of imagining it is something that it is not. 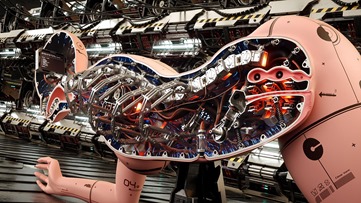 BB: Hence sex robots are very realistic, from a certain perspective which tends to depend upon a certain level of inattention and conventionality. Both seem to correspond to a fairly general male heterosexual convention. By contrast, male robots currently on offer are literally built out of versions of the female ground plan, mouths designed as receptacles (o, joy), and so on. Most significantly the male robots qua based on the female robots are the same size. On the one hand this is a ‘good thing’ given that sex robots must be dragged about manually inasmuch as they are exactly not automata à la Descartes. They could not be mistaken for a human being wandering in the street because there is no wandering that they do.

CB: Aye, the sci fi movies taught us to expect ambulatory androids… thus we failed to recognise how ubiquitous robots became in a relatively short space of time. You mentioned that you expected to be underwhelmed by ‘robot friends’?

BB: I expect to be underwhelmed by them because the test of the Turing test tends to have absurdly low standards to begin with: we credit others with having minds, this is the good old problem of ‘other minds’ after all, but as Nietzsche points out we are quite capable of retracting that credit at any time, especially when we think back on things and when it comes to interaction, a certain amount of our engagement with a friend and a great deal of our engagement with a lover involves reflection on and reconstruction of motivation and intention.

CB: It seems to me quite clear since the very first bot, Eliza, which was created in the mid-60s, that all something needs for us to inject consciousness upon it is a willingness to let ourselves talk at it. Eliza’s trick was picking up keywords in what the human typed and turning it into a question – you say “I’m angry at your mother”, and Eliza says “Tell me about your 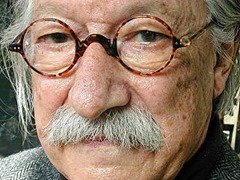 mother.” Which is a clever trick, when you think about it, and one that therapists also like to deploy. Personally, it seems to me that Joseph Weizenbaum should be the patron saint of contemporary social media bots, because his Eliza paved the way for them (although, as a Jew who fled Nazi Germany, ‘patron saint’ is probably a bad choice of wording). As someone who studied AI at a Masters level, though, my main takeaway was that we have no viable way of making a robot that is a being we could be friends with, even though we can certainly make bots capable of interaction. But then, a cactus can interact with you...

BB: That thing-interaction was Schopenhauer's presentative point regarding the world, though I am fairly sure he was not thinking of cacti. Regarding the diffusing of bot interaction, which has its own set of codes, of course, it may be that the Turing test has a certain bit of trivial play left in it.  It can happen that one can mistake one kind of bot for another kind of bot.  And proof of the Turing test is the thrill kill one can experience on Twitter upon discovering that a bot one takes to be a not is not a bot after all. I used to play with Latourbot, for the fun of it, talking to Latourbot as if he were Pepé le Pew, a cartoon skunk dating back from years before my time, until Latour himself yelled at me (if one can yell and of course one can) not to pay any attention to the Latourbot as it was only a troll. Only. A. Troll. I was crushed. Maybe it wasn’t Latour who did the take down, what else was unreal, blue pill or red pill?  What could I do? And so I unfollowed what I had taken to be an automated account, a robot account and just because, as it turned out, it was not a robot account. The Latourbot was not a bot. Had it been a random algo, a tweet generator as I had supposed it to have been, it would have been better, if it is also true that I needed it to have been an Aramis-style automated joke designed at Latour’s behest. At the same time, inasmuch as I had been pretending to myself that the algorithm (again, I never took it to be Latour) was a cartoon skunk, I was also rather relieved. As one of many fake-twitter accounts, some of which but not all include ‘fake’ in the name, like the Twertzog account, tweeted by William Pannapacker pretending to be Werner Herzog, the dissonance of an accent (Hertzog’s German and Latour’s French) became an element not of charm but disquiet. This is one of the problems of projected intentionality as even this animates mechanism.

CB: Aye, nothing is truly autonomous, is it? The networks of connectivity bear upon agency in so many ways, and not just in questions of interpretation and meaning, since the practices we learn can’t be dismissed as entirely subjective, even if what those practices mean to us, or to others, is always somewhat negotiable. How quickly we learned to put on a mask and present ourselves in the digital public spaces – and how slowly we realised the costs of that anonymity.

The dialogue concludes next week: Techdolls

Thanks for the link to the recording!