Redirect
A Fabulous Planet to Die On 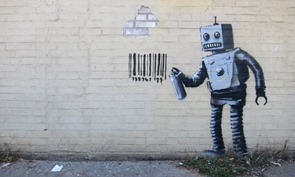 Either the dog is the paragon of fidelity, expressing boundless loyalty to their human, or dogs are incapable of fidelity. It comes down to whether the bond a dog forms with their pack leader counts as a promise, and there are good reasons to say that it doesn’t. Nonetheless, I come down on the other side of the argument and see dogs as practicing fidelity in their own unique and admirable ways. The counterpoint amounts to claiming a dog’s commitment is merely instinctual habit. This contrast – habit as against fidelity – is precisely the battleground upon which cyborgs are losing.

In Imaginary Games, I draw against Félix Ravaisson's remarkable 1838 conception of habit as what sets aside beings from things. Habit, for Ravaisson, has two sides – it is the foundation of all our skills and excellences, which only achieve anything through the repetition of training and application. Yet it is also the source of addiction, and it is not coincidental that phrases such as ‘habitual user’ and ‘habit-forming’ have attached to substances such as heroin. The virtue of fidelity that I have been carefully tracing is what allows our skills to achieve their excellence, for the artist, athlete, researcher and so on achieves their proficiency only through commitment to their chosen path. If my argument in Wikipedia Knows Nothing is accepted, this means all knowledge comes from fidelity, since if knowledge is understood as a practice, only fidelity to a practice attains it.

Yet there is something missing in this characterisation, a hidden aspect I tried to draw attention to last week by taking marriage as an exemplar of the relationship between faith and fidelity. Whenever we exercise fidelity, we form a bond with other people. This is most visible in marriage, but it can be found in all cases that fidelity occurs (even if it is sometimes a commitment to honour the dead in some way, rather than the living). The athlete’s fidelity to their sport binds them to their trainers and fellow competitors; the researcher’s fidelity to scientific methods binds them to their research community (for all that the empirical sciences sometimes foster a perverse obfuscation of their human dimension); the artist’s fidelity to their craft binds them not only to the lineages of art that inspire them, but to communities of appreciators without whom their work is incomplete. Fidelity, therefore, is both the root of knowledge and the wellspring of community and culture. To lack fidelity is to become, as traced at the beginning of this discussion, a cultural nomad, and this is not freedom but a kind of ephemeral prison.

As cyborgs, we are assaulted with habit-forming situations because commercial technology is designed, from the ground upwards, to be addictive, to form habits that turn to desire rather than fidelity, to addiction rather than knowledge. Take, as the smallest example, your relationship with your smartphone. By design, this robot is not intended to last, it is not meant for repair beyond trivial interventions (a broken screen, for instance). It is intended to habituate you to its action before being rendered obsolete by the escalating scales of computing power that drive hardware sales. The announcement of a new iPhone or Android phone is intended to push our buttons and draw us into ‘upgrading’, a euphemism for indulging an addiction to the new. This critique can certainly be challenged, but to do so on grounds of increasing utility is to fall prey to the moral disaster of consequentialism and thus be shallow sighted.

Although I am no fan of motor vehicles, I would like to compare the way cars were designed fifty years ago to the way they are designed now. For it is not a coincidence that classic cars are still in service: they were built to last, and designed for repair. A mechanic could express fidelity towards these machines and thus gain knowledge of them. Today, the core function of an automobile is barred to all but the wizards of manufacturing, and an onboard robot controls almost all functions thus reducing the role of mechanics to merely substituting faulty components when instructed. These are machines built for obsolescence that bar all practical knowledge of their workings except as proprietary trade secrets. In short, the design of contemporary machines aims at dependence, and this cyber-dependence is the first principle of commercial technology. It is not a coincidence that the clockwork torch (or flashlight) was designed for Africa and not the ‘developed’ world. ‘Developed’ here is a synonym for ‘dependent’.

Thus Facebook (or any other social media platform for that matter) is designed not for fidelity, nor for binding people together in practices that foster knowledge, but for dependence and addiction. Follows and shares are the motivating force by design, and this pursuit of metrics to measure ‘social success’ serves to substitute dependence for fidelity, addiction for community. That is not to say that fidelity cannot be expressed through these purportedly conversational media – merely that they are not designed to support it. They are created for cyber-dependence, and the utility of the communicative networks they create blinds us to this in yet another example of shallow sightedness. It is scarcely surprising that propaganda, ‘fake news’ as it had been dubbed, thrives in systems that discourage fidelity and thus minimise productive community. Knowledge requires fidelity to a practice; when it is reduced to repeating, we come adrift from our epistemic moorings, as the Wikipedia, that methodical aggregator of corporate artefacts, epitomises.

What would cyber-fidelity mean, and could we imagine technology built for it? Fidelity is founded on a promise, literal or figurative, a commitment to be part of something and thus to foster knowledge within that community (whether we are talking sports, research, art, or whatever). Cyber-fidelity would therefore apply whenever our robots aided our commitment and our communities without simultaneously engendering our dependency. At the moment, whatever fidelity is expressed via the internet does so against the prevailing winds of dependency. If you wish to learn about fidelity, you will find exemplars more easily in the so-called Third World than in the Dependent World we live in. Hence the suggestion that there is a pressing need to technologise the planet is another aspect of the moral disaster of consequentialism – the free ‘Third’ world does not need to learn our dependencies from us; colonial occupation already established dependencies that will not be resolved by adding technological addiction to economies that were optimised for colonial export and that always acted as cyber-dependencies, long before computers upped the ante.

What I am calling cyber-fidelity is another name for what Ivan Illich called convivial tools, technology that empowers individuals within their communities, rather than creating dependence and dividing or destroying community in the name of ‘progress’ (the consequentialist war-cry par excellence). The bicycle versus the car is just one example of cyber-fidelity versus cyber-dependence – and here it is not a mere footnote that the former fosters physical fitness and mechanical skill through maintenance, while the latter fosters ‘road rage’ and planned obsolescence. Note that both cars and bicycles are products of overlapping technological networks: tyres, gears, steering... but one empowers its human and community, and the other fosters dependencies, on manufacturing, oil, and infrastructures that are far from egalitarian.

In asking earlier if dogs could express fidelity, what was at stake was a distinction between habit and dependence, and now I can suggest another aspect of this question: the dog’s commitment to its pack is the evidence of its fidelity. The dog not only belongs to a community – and for domestic dogs, that means both the humans they live with and the neighbourhood dogs they fraternise with – but it has knowledge of that community. Indeed, it is the principal knowledge that any dog learns. The dog cares which other dogs have been in the park recently, and cannot wait to be reunited with members of its pack as they come back home. The dog, in other words, is a convivial being, as (in its own way) is the cat. The human too has this capacity; we are, as Donna Harraway suggested, a companion species to our dogs and cats, and rather less so in the context of our robots.

Like cars, computers opened up a space that could be convivial or could fall into dependency – and at this point it seems clear which way they have gone. Nothing marks me out as a heretic quite as spectacularly as my suggestion in Chaos Ethics that we have more to learn from the traditional cultures of the Third World than they can benefit from moving uncritically towards the Dependent World we live in. If we wish to build computers that can foster cyber-fidelity, perhaps we should look to the clockwork torch and the way it was designed to be of use outside our enmeshing networks of technology. I do not know what a convivial computer might be, I do not know whether cyber-fidelity is even possible in a world of robots – but we have truly narrowed our horizons of possibility to mere technological addiction if we cannot even imagine trying to explore this uncharted and unimagined frontier.

The opening image is by Banksy. As ever, no copyright infringement is intended and I will take the image down if asked by Banksy, which seems unlikely.