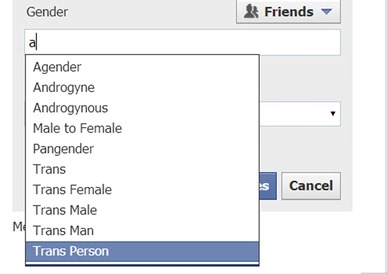 When Facebook began offering a bewildering array of options for users to select ‘gender’ (56 in the US, 71 in the UK), it garnered a great deal of attention. Advocates for the trans community welcomed the change, which freed them from the limitations of menu technology that forces a binary ‘male or female’ decision upon people whose relationship with these terms was nowhere near as simple as checking one of two boxes. The change also allowed millions of people in the LGBT demographic to be more accurately targeted by the marketing of companies who advertise on Facebook… like all the other gender technologies we currently use, there was both a political and an economic face to its use.

To speak of gender as a technology, as Teresa de Lauretis did in 1987, is to recognise the way that our concepts of technology are, like software in general, available to be hacked, and at the same time to acknowledge the way those gender concepts are embedded within technology. For example, cinema and television have various ways of portraying and thus normalising gender roles on screen. Beyond this, the network of things that we are all embedded within has myriad traces of gender: high heeled shoes, ‘Action Figures’ (which are thus divided from ‘dolls’), tampons, jock straps… no matter how individuals claim and re-purpose these things for their own identities, the traces of gender remain throughout consumer culture.

What we often fail to address in our dealings with gender technologies is that, as tools, they do different jobs. The notion of complementarity that many religious practices embed had radically different meanings before the struggle for economic equality supplanted them, and created what we call discrimination. At its best, the tool of gender complementarity can encourage respect for difference, create safe spaces for conversation, and distribute power in many ways that are not necessarily economic. Conversely, the notion of non-binary gender that inspired Facebook’s explosion of gender categories is a tool ideally suited to the job of recognising what has been concealed in the margins. It provides a deconstruction of ‘male’ and ‘female’ concepts, and a wider understanding of the many ways of being human. This gender technology runs into trouble, however, when it tries to supplant complementarity – when instead of offering itself as a more subtle tool for fine working, it insists it is the only permissible tool.

Pragmatically, a great many (although not all) non-binary genders require the gender tools of complementarity to validate their meanings. It does not make sense to transition from one gender to another without using both the complementarity tool and the non-binary tool. We are not doing a great job with either at the moment, and I don’t know if this is because our tools aren’t good enough, or whether we simply lack the appropriate skills to get the most out of what we have.