Bitcoin
The Journey Towards Trans Liberty 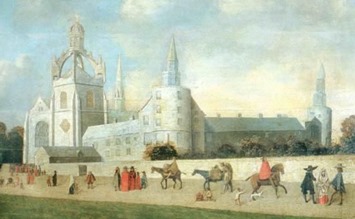 Given the historical relationship between universities and books, it would be easy to jump to the conclusion that the printing press was a key moment in the development of the university. But as Ivan Illich traced, it was the new writing techniques that emerged in the twelfth century (several centuries before printing) that transformed texts from an oral tool – something to be read aloud or indeed, sung – to an optical tool that can be engaged with a page at a time, rather than a letter at a time. The university, the community of scholars, grew up around this new form of text, and the content of each text was understood as a communication from and (in a sense) with the original author.

By the nineteenth century, the situation had changed considerably, but there was still a central role for communities of scholars engaging with specific texts. Writing in 1852, John Henry Newman presented a snapshot of the concept of a university at a time when the contemporary research university was unthinkable. Newman considered research a task for different kinds of institutions altogether, and alleged that intensive specialisation and narrowly construed focus – while effective at advancing a field – deformed the character of the person in question. In effect, Newman accused what we now call a university of being cyber-restrictive, of having negative consequences on the excellences of the individual who engages with knowledge in this way.

What I have witnessed in my time is the transformation of the research university Newman failed to foresee into a mere extension of the school system (something Illich also had cause to criticise). University students in the UK, US, Europe and elsewhere proceed to university education as a next step in their schooling and, increasingly, as a form of training for eventual employment. Any sense that attending a university might be cybervirtuous in itself is lost in this arrangement – the merit of university education becomes purely instrumental. This situation is echoed in the payment system in the UK and US whereby students themselves tender substantial fees in order to improve their chances of employment in a specific sector.

A cybervirtuous university must be more than a provider of job training, and far more than an institution justifying itself via the economic benefits it provides for industrial benefactors. For a university to instil positive characteristics upon those who engage with it all but requires an escape from thinking in terms of measured outcomes at all – and make no mistake, it is these bureaucratic agendas that shape university life today. To encourage the best qualities of its students, a university must begin by being able to encourage the best qualities in its faculty. This has traditionally meant to foster their autonomy and their sense of community, to allow them to explore their own academic paths in the support and fellowship of their peers. If this idea of a university is not already dead, it is certainly endangered.