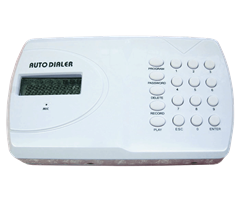 Of all the multitudes of robots sharing our world with us today, few are as wretched as the Autodialling Ambulance Chaser. With the advent of Voice Over Internet Protocol (VOIP), automated phone calls do not even require a standalone unit like the one pictured here – all you need is a computer and access to the internet and you too can harass strangers over whatever petty matter you choose to pursue. But despite the possibility of anyone firing off scattershot phone messages to everyone else, autodiallers are primarily used as a means of directed marketing, and one particular usage outstrips all others: ambulance chasing.

You may recall the inimitable Phil Hartman’s shyster lawyer on The Simpsons, Lionel Hutz, saying “You can ching, ching, ching, cash in on this tragedy!” Well, there is plenty of money in personal injury cases and the only difficult part of the process is finding clients. It used to be that you’d have to personally locate those with personal injury claims by, for instance, hawking hospital wards – a practice that gives us the term ‘ambulance chaser’ in the first place, since the lawyer or their minion could follow an ambulance back to a hospital and then check to see if there was a law suit. But VOIP disposes of this time consuming process by foisting the legwork onto a robot that repetitively dials numbers until it finds someone with a personal injury claim.

The call begins something like this: “I hear you’ve been in an accident recently, and we want to talk to you about a claim for personal injury.” At this point, the person on the other end of the line either hangs up indignantly (in which case the robot simply dials the next number…), listens to the entire message because they are bored but does nothing (triggering the next call), or jumps through the hoops to contact the human at the attorney’s office and take the process forward. You can liken the process to fishing, and as with most angler’s experiences, there’s a lot more casting the line than there is reeling in. This means that the overwhelming majority of humans who encounter the Autodialling Ambulance Chaser have nothing close to a personal injury claim and are simply being mildly harassed by a robot.

This is another example of what in The Virtuous Cyborg I call cyber-disdain. There is no respect for the people being called by this robot, the vast majority of which are simply instrumentalist dross discarded in the search for that rare situation where somebody did recently have an accident. I suppose it could be claimed in defence of this irritating little robot that it sometimes finds people with claims and ultimately gets them money. But even then, is a society that obsessively turns to the courts to turn tragedy into cash really one that we ought to be encouraging?

If someone answers, they don't just get harassed the once. Then their number goes into a list of likely responders, that list is sold to a list broker, the list broker continually sells that list to one business after the other, and the number will be called much more in the future. If you're that very rare fish that bites, you're more likely than others to bite again, and therefore your contact information is valuable.

Hi Mordechai,
In other words: the situation is worse than I am suggesting? I should not be at all surprised if this is the case...

The situation is worse than you are suggesting, yes.