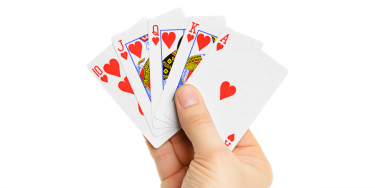 I am hard-pressed to identify a technology with a more profound influence upon my life than the deck of cards. I might never have become a game designer without this simple collection of 54 printed cardboard rectangles to open up the possibilities of the design process to me at a very young age… I was designing card games by age 12, although to be fair I was adapting 8-bit arcade games to the playground at age 9 (Joust remains a favourite) so perhaps I was always fated to pursue game design in one form or another.

If a game console is a device designed for the express purpose of executing arbitrary programmatic systems for entertainment, then the deck of cards was the world’s first game console. All previous games except dice had components specific to their design, but this was not the case for the first cards (quite possibly Chinese ‘money cards’, although the history of the deck of cards is rather hard to trace owing to the poor survivability of actual cards). By creating a set of components that were coded into both numerical values and suits (usually four), human-deck cyborgs had a means to create myriad different games – and have indeed done exactly this over the millennia that followed.

Now the question of the cybervirtue of a deck of cards is an interesting one precisely because for much of their history card games were expressly gambling games, and therefore seen as a quintessential expression of vice. Yet anyone who carries a deck of cards with them has the capacity to wile away spare time with engaging solitaire games that cultivate attentiveness (if not patience, per se), and an ability to create a convivial play experience for an arbitrary number of other humans who can be easily incorporated into the same cyborg network more or less at will. The deck of cards experience can be cyber-hospitable, cyber-disciplined, cyber-prudent, cyber-cunning, cyber-creative… the number of positive qualities that can be instilled by playing cards with other humans is far more than I suspect anyone has ever thought much about.

On the other hand, few games encourage quarrelsome behaviour quite as much as Bridge, and overly competitive behaviour is also a debility that can be brought on by using a deck of cards. And while deck design does invite artists to display their excellences, most custom decks are essentially just advertising for the endless river of corporate-owned media that saturates our world today. I know most people in videogame development are more impressed by the latest computer specifications for high powered digital games consoles, but I can’t help myself: the deck of cards trumps all other multi-role game technology for its flexibility, its simplicity, and its potential to encourage virtue.