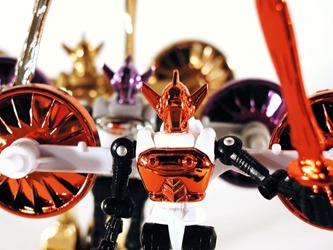 Although I own many Star Wars collectibles from the 1970s and 80s, some slightly older Star Trek memorabilia, and far too many classic comics, the pride of my collectibles for me are my Micronauts toys. They’re not especially valuable, but they tap into the warmest feelings of my childhood – both the toys themselves and the Bill Mantlo penned Marvel comics licensed from them have a special place in my heart. That feeling is the locus of a contemporary commercial phenomena that did not and could not exist at any other time in human history.

The vintage collectible technology network is a weird and sometimes wonderful thing that quite literally trades in nostalgia. Don’t confuse it for the different (but related) marketplace for antiques... people largely buy antiques because of the assurance that they will only gain in value (although also for aesthetic reasons) but rarely if ever because the items draw against fond memories. Of course, vintage collectibles shade into antiques over time – nobody buys a 1938 Action Comics #1 because of nostalgia. But catch a middle aged nerd with the toys from their childhood, and you are ready to make money from them.

Before the internet, vintage collectibles were sustained by a diffuse set of shops and intermittent comic marts and the like. Now, eBay dominates the commercial engagement with nostalgia, taking advantage of the funnel the online world facilitates in a subtly different way to a conventional retailer like Amazon. Both, however, are participating in what Theodor Adorno called the culture industry – the manufacturing of shared cultural experience for which Hollywood is emblematic. The movie business has been the driving force behind commercialized nostalgia... although YouTube has rapidly become a key player in its own right.

Asking if there is any cybervirtue in vintage collectibles is to explore whether the network of people and things it sustains has any positive qualities – and it does. It successfully sustains communities (albeit in rather thin ways), and within those communities there are a few people eking out a living from the nostalgia trade. Yet there is also a troubling side to the way our fond memories are deployed by media corporations through the application of ‘branding’ and intellectual property. Whatever small earnings are possible for individuals from the exchange of vintage collectibles is dwarfed by the culture industry’s billion dollar nostalgia racket that does not always pay royalties to the creative staff responsible for the original work.

Bill Mantlo gets nothing for the work that he did which gives Micronauts toys their value to me, and I don’t even know the names of any of the Japanese toy designers at Mego. But at least a recent deal with Marvel over the rights to Mantlo’s characters (including Guardians of the Galaxy’s Rocket Raccoon) allowed him to move out of a nursing home after being trapped there for twenty five years. I can but hope this situation is improving.

Thank you for your treatment on this topic. I have responded through my own blog-letter, through the Republic of Bloggers.

Many thanks for this! It sets a few other thoughts running with me... And infinite gratitude for your continuing participation in the Republic of Bloggers - there are few of us left... those that remain should definitely be talking to one another! I'm not sure if I'll be responding directly or indirectly, but I will follow this up at some point later this year.