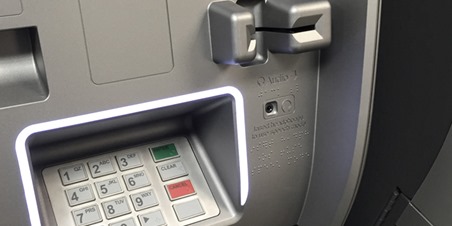 For the majority of people reading, the cash machine has been the primary dispenser of money for their entire lifetime. I am old enough to remember when my parents had to plan to go to the bank to get cash, and a musician I used to work with recalled having to plan weekly and monthly finances around the need to turn a pay cheque into currency. Indeed, the decline of the cybernetic network that issued and endorsed cheques precisely aligns with the rise of the cash machine – although as will become clear in the sequel to this piece later this week, the venerable ‘hole in the wall’ is now also facing a near-inevitable decline.

The Automatic Teller Machine (ATM) is a remarkably honest name for a robot: it makes it immediately clear whose job is being replaced and by what. The rise of the ATM as the primary provisioner of currency has been as much due to the relative compactness of the units as anything else: a bank branch requires floor space, significant security arrangements, and pesky human staff who require paying at regular intervals. The cash-dispensing robot just requires the construction of a miniature vault, robotic ‘fingers’ to count the notes, and all the computer hardware and software required to make it work with the already-extensive cybernetic banking network. As is so often the case, the appeal of the robot as a solution to a problem is that you only have to pay once to buy it, while the on-going costs (such as security guards to deliver money) are the same or less than the alternative arrangement. As usual, economic benefit wins.

What can we say of the cybervirtue or otherwise of the cash machine cyborg, the human dependent upon these robots for hard cash? It is not immediately that clear there is an upside here beyond ‘convenience’ – compared to the alternative, cash machines are the epitome of availability. Unlike banks, robots are up all night – which has been a boon for cash strapped humans, not to mention muggers. In removing human contact from the acquisition of currency, the ATM embodies our increasing reliance upon networks of robots to manage our affairs. After all, even if you did go to your bank branch, the human teller would engage with a robot of some kind that would talk to other robots in the process of arranging your withdrawal. Yet there may yet be a positive side to the cash machine, if we contrast the kind of personal economy it enables against the one that is currently replacing it – one centred upon contactless payments that eliminate currency entirely. It is these cyborgs that the next piece considers.

isn't the pressing issue more and more how we might value human beings beyond their market/labor value?
https://whyy.org/episodes/temporary-work-the-rise-of-the-gig-economy/

Hey dmf,
I'm not trying to assert any hierarchy of values in these pieces; I just take a technological assemblage and consider it for cybervirtue. It's likely at some point I'll cover a set of gig economy cyborgs (quite possibly Uber), although it's not on my list for Cyborgs #21-30. Seventy more to go after that, though. :)

This piece is effectively a preface for Thursday's piece on contactless payments. I was in the mood for a 'double bill'.

wasn't so much interested in topping your illustrations as trying (in my own quasi-heideggerian way) to foreground some of the background issues/techn-ology (in part to raise questions of agency and choice in engineered/plat-formed doings as we've been discussing) it's all welcome and appreciated.
https://deterritorialinvestigations.wordpress.com/2016/08/01/lauren-berlants-the-commons-infrastructures-for-troubling-times/

Thanks! Alas, the follow up piece for Thursday on Contactless Payments failed to run as I had set the wrong flag in Typepad. But it will run this morning. All is chaos - it was ever thus! :)