President of the United States
Spaceships 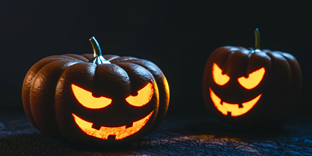 If the spooky festivities of Halloween do not strike us as having any corresponding cyborg, it can only be because we habitually fail to see the technological networks we are embedded within, and thus the vast webs of machines and organisms we are living within. Take Halloween candy as just one simple dimension: cocoa plants in equatorial countries are harvested by humans and shipped by giant container vessels to factories in industrial nations. There, spherical moulds used to make chocolate snowballs for sale in December will instead make chocolate Jack-o’-lanterns, and humanoid moulds make ghosts and vampires before they turn to making Santas, and soon after anthropomorphic rabbits. Then off by giant freighter once again to supermarkets where they are bought to hand over to young children at the doorsteps of millions of houses on one single night of the year.

As already explored, our calendar is inherited from Christianity. Christian festivals were influenced by older pagan festivities – such as Ostara (Easter) in Spring, Yule (Christmas) in Winter, and Samhain (Halloween). Whatever ancient Celts may have done at this time of year, contemporary pagans celebrate Samhain (pronounced ‘sah-wun’) as a time to honour the dead, and the Day of the Dead on November 2nd that is celebrated in Mexico and elsewhere is directly parallel. In the Christian calendar, All Hallows’ Eve (from which Halloween takes its name) is not even the significant date: it is merely the night before All Hallows Day, which is the day before All Souls Day – which is the aforementioned Day of the Dead. All Hallows Day, or All Saints Day, is for honouring the beatified dead prior to offering prayers for everyone else the day after. This aspect of these festivities is all but lost in the vast commercial cybernetic network these religious practices have spawned.

If we ask about the cybervirtue of Halloween, we’re enquiring into the positive and negative behavioural effects of this odd cybernetic network. Buying candy does not seem to offer much sign of virtue, although giving it away for free is ostensibly generous, if it is not done out of fear of reprisals in the form of egging and the like. Strip away the commercial veneer of neutered monsters and mandatory candy, however, and focus upon the surviving Christian and pagan rites of remembrance and it is easier to have something positive to say. Even without invoking anything supernatural, the world around us is a living echo of those who came before, and we are as much the cybernetic production of the souls of the dead as of our trade distribution networks (also set in motion by those now gone). The cyber-respectful honouring of the dead wrought by calendars and mementos off the departed is far less entertaining than the circus that is commercial Halloween, but it also might be worth far more to the humans involved, who may yet gain a clearer vision of their future through reflection upon the past.

Halloween has become an interesting sideshow for me. Living in Japan for the past decade has not so much detached but rather distanced me from Western Cultural influences giving me a similar sense of, we’ll say “wonder” that I suspect Britons also feel.
But Halloween has marched yearly from the tacky decorations bedecked on the display shelves of businesses pursuing globalism (sa-ti-wan aisu kuri-mu) to get another chance to hock more unneeded garbage to a populace already living in rather narrow environs.
With the traditional Buddhist celebration of the dead having already passed two and a half months earlier, there is absolutely no attempt to promote the nearly-forgotten religious overtones, so the holiday here becomes merely a sub-class node of the cyber-network, with a great deal of its data and functions lost in transmission. Instead, it’s more akin to the Italian Carnivale, revelling in it’s disruption of the traditional business and suit cyber-networks.

Hi Patrick,
Thanks for sharing your perspective here! Your description not only offers an insightful perspective on Halloween 'Nihon-de-wa', but also I think something of the sense of the Japanese adoption of all manner of gaijin activities that are divorced from their roots and thus take on strange forms. While he was with Q Games in Kyoto, my friend James would send me a token of Japanese weirdness every Christmas that never ceased to feel as if it could have originated on another planet...

All the very best!