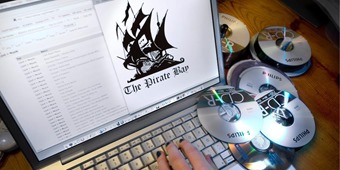 If a ‘black market’ is anywhere goods and services are exchanged illegally for money, a ‘black library’ is where they are exchanged for free. Although some illicit copyright infringement did happen in bricks and mortar library buildings – music CDs copied, for instance – there was nothing like what I call the Black Library before internet connectivity opened the door to filesharing piracy. Any media that can be stored electronically – films, TV, music, books, pictures – is now shared via the BitTorrent protocol thanks to the vast digital infrastructure of the internet, the availability of computers able to connect to it, and a widespread willingness to break the law.

The Black Library fascinates me. From its contents, it is clear that is primarily operated by a ragtag conglomeration of nerds, especially (but not exclusively) in the US. Yet despite the illegality of copyright infringement, this disparate community maintains its own sense of virtue. Those who persistently maintain files in the Black Library are ‘seeds’; those that take and don’t give back are ‘leeches’; there is a strong ethos of aiming for at least a 1.5 ratio of data downloaded to uploaded – that is, the pirates of the Black Library are encouraged to ensure not only that they pass on what they take to another cyborg, but to another ‘half’ a cyborg too. You will find few other places in the media economy with such virtuous ideals.

Unless, of course, it’s your work being pirated – then the cry of ‘theft!’ will be upon your lips. Except filesharing is not much like stealing and much more like forgery: you don’t take something away, you duplicate it without legal right to do so. But then, so did everyone who videotaped a television show and kept the recording, or made a bootleg recording of a rock concert (now considered valuable cultural artefacts). Here lies the strange world of intertwined virtue and vice that is the Black Library: because we cannot help but notice that it is the media corporations who suffer the greatest losses from piracy, with creators largely only suffering significant loss if their sales are at superstar volumes (like long-time filesharing enemy Madonna), it is rare for pirates to feel any remorse for what they do.

Personally, I see the moral weakness of the Black Library not in terms of copyright infringement but in the absence of thought it encourages with respect to the complex network of media creators whose work is (potentially) disrespected as it is parasitically copied. Yet I place great stock in libraries of all kinds; the litmus test of a civilisation is the state of its libraries. I cannot in good conscience condemn a someone for operating a library, even when doing so is breaking the law – and there are far more scurrilous and despicable cyborgs in our world today than these outlaw librarians.

Ha, Ian and I go way back... He's the one dual class philosopher-game designer to have more name recognition than me. :)

Thanks for the link,

sure OOO is pretty useless generally but I don't see his thinking as being deeply connected to Harman and co. despite their social links, I liked his Alien Phenomenology book and his Atlantic series

Hey dmf,
I wouldn't single out object oriented ontology specifically as useless - my general sense here is that "all ontology is utterly useless" i.e. our imagined models of how things sit together are not as important as we like to emotionally invest into. This was as true of Middle Ages cosmotheology as much as it is true now, for reasons I wrote about previously in Ontology as Non-theology, which is a piece that (rather fittingly!) nobody really cared about, even though I feel it contains an absolutely critical observation on our contemporary philosophical situation that perhaps ought to be taken more seriously than it is.

Ian does great work in The Atlantic, and I admit a little touch of envy that he has such a platform available! But he has earned it, too. I'm also jealous that he has got to be part of a philosophical movement whereas I get to be a loner, which is not as much fun. But these feelings are pretty trivial and I don't let them bother me. :)

"our imagined models of how things sit together are not as important as we like to emotionally invest into" yes I've long (largely in vain) tried to make such points, one does not (can not) live out a world-view or an ontology or such, part of why I'm taken with non-representational enactivism (great related talk @ http://ensoseminars.com/presentations/past22/), I'll check out the link thanks.
Ian does good work and is a good egg so nice to see that rewarded.