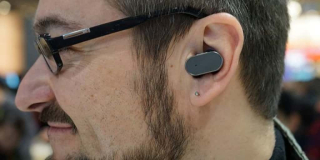 Fascinating cyborgs are made through the use of miniaturised speakers and a microphone in what is frequently called ‘an earpiece’, a term that also refers to the speakers of any telecommunication device held up to your ear. The earpiece joins two of more humans through a local cybernetic network allowing either two-way communication or just listening. The most famous uses for such a system is in bodyguarding or espionage, but the situation you are most likely to encounter earpieces is radio DJs and TV news anchors, whose producers provide constant steering directions direct to their ear.

The question of the cybervirtue of earpieces is that of the positive and negative behaviour it might bring about, and the earpiece encourages a kind of attentiveness that can be viewed as beneficial. Although there is a subtle and largely harmless element of subterfuge entailed in these arrangements – an invisible presence communicates covertly – the moral implications of this are largely innocent. For the most part, earpieces provide beneficial ways to bind co-workers into communicative groupings, and allow for new forms of co-operation that were strictly impossible before radio technology – although the famous scene in Cyrano de Bergerac is at least suggestive of earlier precedents, albeit with substantial poetic license and modestly nefarious intentions.

In science fiction games and stories, the earpiece is replaced with an aural splice – a digital device implanted directly into the ear. Here, the Bateman-Clarke Conjecture strikes again! This idea is solely appealing because we treat this cyberware body mod as if it were magic. In practical terms, given the inherent fallibility of all digital components, would it really be superior to require surgery to add or remove an earpiece when you could simply slip one on or off? There is the stink of what I have called cyberfetish about this fantasy – we oddly think cybernetic replacements for bodily functions are cool, and fail to notice that to wish for, say, cyberlegs, is to fantasise about being crippled on the grounds that replacement robot limbs must necessarily be an improvement. From The Six Million Dollar Man onwards, these escapist views of body modification have dominated sci-fi narratives. The paraplegic surely has reasons to wish for such technology – but it is perverse for anyone else to do so.

Even with just an aural splice, which does not involve amputation to make it work, are we so sure what we are wishing to get from body modification is not entirely deluded? Might it not be the case that a good pair of headphones already offers a perfectly reasonable way to put audio into our flesh-and-blood ears? Do not be fooled into thinking about technology as magic; every tool has its price, and this is doubly so for imaginary cyberware.