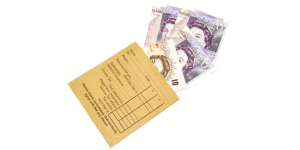 Meet the cyborgs in the money game! The Capital Cyborg with so much money that they no longer have to think about day-to-day living expenses and can focus instead upon plans to make more capital from, say, replacing an entire class of jobs with robots. The Welfare Cyborg whose income from the State is never enough to live on, forcing them almost universally into breaking the rules and supplementing their meagre allowance with often grim, cash-in-hand labour. The Entrepreneur Cyborg, whose fortunes are bound together with a specific set of companies whose dividends they live off. And, most common of all, the Wage Cyborg, who works as part of a company owned by Entrepreneurs or Capital Cyborgs (often both) in return for a fixed dollop of money each month.

Now this is by no means the only way of organizing the cybernetic network that distributes resources, labour, and power. Nor is the only alternative a State takeover of industry so that Capital Cyborgs can be replaced with Communists. But we don't spend much time thinking about how this game could be hacked to produce better outcomes. It does not, as Robert Nozick warned, seem plausible to ensure the kind of monetary equality that John Rawls dreamt about in his Kant-inspired political vision. There will always be differences in wealth and earnings. But it is still perfectly plausible (and potentially possible) to radically reduce the disproportionate distribution of money we currently endure.

What stops this most effectively is that both left and right, whichever country you might be in, argue about which is the best way to entrench the wage system. The view from the right is that giving more power to Entrepreneur Cyborgs will ‘make more jobs’, and thus improve things. This plan is great news for Capital Cyborgs, who spend billions to support it. The view from the left is that more money should be paid out to women, or ethnic minorities, or in some cases all Wage Cyborgs, in order that the financial cybernetic network be made ‘fairer’. But note that even from the left, the Wage Cyborg is enshrined as necessary and essential. When unions strike, it is nearly always about getting a bigger share of the money for wage-earners.

I agree with Nozick that uneven monetary arrangements can’t be eliminated (at least, not from our current position). Trade is fundamental to our human experience now that there are only a few hundred self-sufficient tribespeople left on our planet. But the Wage Cyborg is not axiomatic. Companies can divide their money in other ways than individually priced work agreements, a situation far more valuable to Entrepreneurs and Capital Cyborgs than anyone else. But I rather suspect the main reason we sustain the commercial system we have is not just the influence of those on the top, but the weariness of those on the bottom, who haven’t the strength left after working to make a stand. And so the game rolls on...