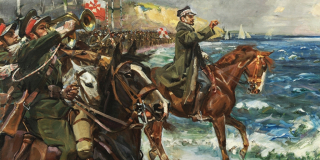 The military rank of captain, much like the corporate rank of manager that partially descends from it, is an ancient cybernetic invention. It is different from the power structure of the chieftain over a tribe, and indeed, harsher, since the chieftain listens to the tribe before making the important decision – the captain does not, and the manager typically will not, for all that they could.

If it seems strange to talk of the Captain as a cyborg remember that cybernetics is concerned with communication and control: this is the essence of the role of Captain. Those with a higher military rank give orders that cannot be questioned, those beneath the Captain in rank respond to their orders in kind. The Captain cyborg is thus a conduit of communication and control: they execute the orders given to them by using their own experience and creative intelligence to determine how their squad will act.

When it comes to the cybervirtue of the Captain, the question is: does this technology (in this case, social technology) encourage positive qualities in those who participate in it? And here, we must answer in the affirmative in so much that both the Captain and their squad display loyalty, discipline, efficiency, camaraderie, and many more virtues beside. We may resist admitting it if our tendency is to be suspicious or denunciative of the military machine – but it is not coincidental that those with a military background frequently become respected members of the communities they return to after serving.

There is probably an argument that the Captain cyborg (of whom the squad are also participants) encourages negative qualities too, such as a restriction of judgement, and further risks of abusive consequence but I am reluctant to stress this aspect too hastily. The abusiveness that can flow from command is also a risk in its absence, something anarchists are loathe to admit, and the restriction in judgement that comes from the unflinching willingness to respond to perceived duty is not much different from the consequence of any speciality, which necessarily reconfigures your horizons of perception.

One of the reasons I have always respected honourable military service is because I have a sense of the virtue of the Captain cyborg. My issues with the military, especially the imperialistic actions of Western nations including my own, stem from problems higher in the chain of command, where virtue is lost and Consequentialism – one of the moral disasters of the twentieth century as I argue in The Virtuous Cyborg – gradually dominate and corrupt. It is hard, sometimes, to retain the respect of the captain and the squad when the mission they have been assigned is scurrilous and ill-advised. But I cannot, even as a near-pacifist, do anything but respect those whose allegiance to one another is the basis of something unique and admirable. I wish the same could be said more often of the manager...

The opening image is Poland's Wedding to the Sea by Wojciech Kossak, and depicts a general rather than a captain.