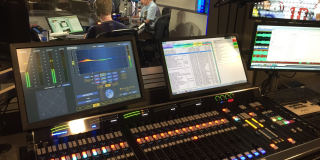 Despite the decreasing importance of radio waves to their job, the radio DJ remains emblematic of the contemporary cyborg. This odd claims rests on the recognition that every radio DJ exists only through their relationship with technology, that anyone who encounters their work does so through technological means, and that behind and below their work lies a vast network of cyborgs dominated by corporate interests yet still in certain places resistant to that inevitability.

To ask about the cybervirtue of the radio DJ is not to ask whether DJs are virtuous people but to ask ourselves whether our engagement with these cyborgs is virtuous or can encourage the good in us. And the brutal truth of this is that I do not know what to think. I know I enjoy listening to the music championed by Radio 6 Music, and to the eclectic selections of Justin Robertson's Temple of Wonders on Soho Radio... But is my entertainment enough? I am increasingly sceptical of the pervasive logic that makes entertainment value our unchallenged core value, and nervous about jumping to the valorisations of the term 'art' as a defence, even though I do not doubt music's credentials in this regard, and rather suspect even the act of DJing might in itself qualify as an artform.

Perhaps I stumble around the way the radio DJ presents themselves as a distant friend. "A little bit of me, a little bit of you" is how one Radio 6 presenter advertises her show. But there is nothing of me there at all, except my time: the music chosen is almost all her, the monologue comes from one source. Less than 1% of listeners carve out even a mere minute of time in any given show. The disproportion of DJ to listener is evident... we buy into a relationship offered as reciprocal that is decidedly and necessarily one-sided. Even thinking about how this staves off the epidemic of loneliness for the lovelorn-many does not assuage my concerns.

Yet even if the technological construct we call the radio DJ were not cybervirtuous, even if no part of my participation with their work encouraged anything good from me, I would still defend the virtue, in its old fashioned sense, of those who advocate for musicians, whose work would be untenable without the acts of discovery and support that DJs on Radio 6 and other stations provide. If I quietly sneer at those presenters on commercial radio who exist almost solely to line the purses of ultra-rich recording industry nobility, it does not dint my admiration for those engaging on a daily basis with the cyborg artform par excellence: music. The DJ is not especially cybervirtuous for me, the listener. Yet in so many cases they might still be a site of cybervirtue all the same.