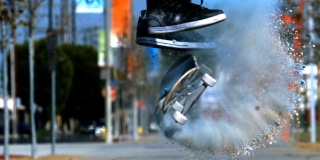 Walking in the morning to San Francisco's Moscone centre whilst at GDC with the other pedestrians earlier this year, I could never suppress my smile at seeing some fellow upon a skateboard making full use of the roads, unabashed and unafraid of automobiles, quietly and confidently using their physical prowess to negotiate the streets of San Francisco swiftly and with style. When someone squeaked past me on the sidewalk on some disk-based robot vehicle, I could not help but snicker, watching money and electrical power substituting for skill.

I could never master the skateboard. Never mind standing up upon it, just sitting on one and trying to roll safely down our childhood driveway was a challenge at the peak of my ability. I did eventually manage to stand up upon a surfboard: never upon a skateboard. I think, in part, my fear of falling held me back. Perhaps more significantly, I had mastered hand-eye coordination as a child but did not learn to balance until I became a commuter, balanced precariously amidst the ever-shifting inertial shifts of bus and train. Perhaps this is the root of my admiration for skateboarders: I had no resentment for my failures, only admiration for other people's commitment.

The human-skateboard cyborg amazes me. I do not mean in the extent of the skill in display in sporting competitions with half pipes and precision moves. All sports are amazing in that way. It is rather the manner that this proud and self-sufficient cyborg comports itself, entering the streets of a city inimical to their presence and tackling it with casual aplomb. Others might read arrogance there, I perceive only confidence and assuredness, the self-worth of a skill earned, I can only assume, the hard way. While it is by no means the only vehicle to display cybervirtues of mastery, and thus to encourage persistence and resistance to minor adversity, it stands out in the urban landscape as emblematic of a willingness to prevail that is at odds in many respects with the assumptions of contemporary life. How many falls and failures precede a successful journey down a city street?

That is what I should truly like the opportunity to observe: not the expertise of the well-rehearsed athlete but the faltering steps of the novice who fails, falls, and falters but does not give up, despite repeated injury. There is a virtue here worth emulating, and if perhaps it is pride that drives them forward in their inexperienced persistence then, well, how can I begrudge anyone who can take their vice and make of it a virtue of another kind? Would that we all could say the same.

I always enjoyed the DIY aspect of skating, whether bored kids in suburbs in California skating empty pools or those of us in abandoned Rustbelt downtowns with little to do but hit the streets with a boombox and a backpack full of spray-cans.

Dude, you are amazing. I go longboarding, and I sometimes feel bad when threading the sidewalk with confidence, for the fear of being perceived as arogant. This was a borderline subconscious feeling, I only have words to say it now because of you and this story. And knowing that you can look upon it with admiration gives me the confidence to do it without fear. Thank you, my friend, keep sharing!

Hey Stefan,
Means a lot to me that this piece reached you! Blogging these days often means talking at the wall (or feeling like that's what you're doing) - thanks so much for dropping by and letting me know that this piece spoke to you in this way.