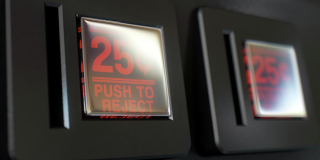 Is there any greater symbol of the arcade than the coin slot? It is the reason that arcades ever came into existence, for it was not art but commerce that brought entertainment machines together into one space. Today, arcades are just as likely to be museums as going commercial concerns – in some respects, the lines between those two states are very much blurred. At Free Gold Watch in San Francisco, which I visited while writing these arcade cyborg pieces, the older pinball tables are dressed with their year of publication and historical context, just as any artwork in a gallery would be.

The coin slot is also a symbol of temptation, and this in more than one sense. In the arcade, the player is tempted to drop coins into the slot to play the game (the necessity of which gives us the term 'coin op' i.e. coin operated), and after Gauntlet (which I shall return to later in this series) the temptation was also there to continue – to keep putting coins into the slot in order to get further. I appreciate now that putting those coins in was to support the arcade and that without them, we would (and did) lose them... the owners of The Gaiety on Ventnor beach were less than pleased with my childhood habit of collecting tuppences that passing cars shook lose from the penny falls and turning them into 10p to play Nemesis or Rastan Saga.

In the 1980s, there was an additional temptation associated with the coin slot known as strimming. Early coin op devices were tripped by the weight of the coin and were inexact about their detection, such that it was possible to use the stiff plastic string that comes with a garden strimmer to trigger the sensor and rack up false credits. I never once did this, nor was tempted to, but I knew a boy who did... Nothing good came from this. The greed entailed led him away from enjoying games and into a kind of adolescent crime spree, knocking over one armed bandits. The arcade owners may have scowled at my recycling of coins, but at least I wasn't outright stealing.

The last temptation of the coin slot is that of the manufacturer – do they make a great game, or do they make a game that encourages more coin drops? For many arcade games, they achieved both. Sega's legendary AM2 (Amusement Machines, Division 2) made games like OutRun, After Burner, and Space Harrier that succeeded in large part because of 'over the shoulder' appeal – it looked fun even when watching. Today's microtransaction games have no coin slot yet risk an even narrower, more draconian focus upon money. There is something to be said for the agreement regarding money laid out plainly in a slot rather than lurking in ambush inside a game that claims to be free-to-play.

A Hundred Cyborgs, #53, part of a ten part mini-serial on Arcade Cyborgs.

Coin slots was the circuit but it was coins that was the current. Coins jingled and you needed to make sure your pants had extra strong pockets if you had a collection of them! There was a feeling of abundance having so much of something that was expendable but sometimes there was regret afterwards if you did not have a very good play session.

I will never forget a buddy and I were playing Gauntlet and getting steadily depleted. We knew our time was up when a random fellow joined in and started plopping coins in both of our slots to help us keep playing! We were both embarrassed and thankful. We played like this for a few more minutes (we were not very good) and felt even more awkward when his enthusiasm with having others to play with became apparent. This generous fellow appeared to have a learning disability and we felt like we had taken advantage of him, even though we had not. When we were getting low we had to tell him to stop putting coins in. This caused him to be disappointed. What a bind. The game eventually ended and we thanked him for allowing us to play with him and then went onto a different coin-op. The experience sure left a mark on my psyche with unanswered questions. Did we take advantage of somebody that appeared more vulnerable? Should we have kept playing if he was willing to pay to provide him enjoyment and camaraderie?

It is unexpected how arcades had their own ethical challenges. Your article was a fabulous way to explore this.

Hey Chris,
This is a fantastic anecdote that really captures the unique ethical ambiguities of the arcade coin slot. I myself had many situations where I had to ask if it was appropriate to pay for strangers to keep playing a game with me, and it was always an odd thing to face.

As for 'extra strong pockets' - there were few more distressing discoveries than that your coins were escaping down your trouser leg!