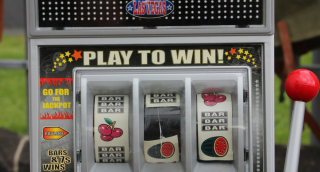 I have always loved those 'one armed bandits' made prior to 1980 over the swirling seductive flashing lights of their newer push-button brethren. It helps that my encounters with the older machines happened early in my life and late in theirs, reconditioned classics taking tuppence or so per pull of the arm in my regular seaside arcade. The stakes were low, the fun inherent to the operation of the mechanical device and the pleasing clacking they made when they paid out a win. It did not in any way feel like gambling, but rather just another way to spend coins in the arcade. We called them fruit machines because that was always how they were marked: with cherries, melons and – less fruity, but still cute – bells, and bars. By 1980, there was an odd sense of innocence to these symbols.

In his late teens, a very dear friend of mine made a most interesting argument in favour of the later slot machines. Unable to save money (having never acquired the habit of holding onto it), the slots were his ad hoc savings plan. Once every few months he'd win a jackpot of a hundred pounds or so and enjoy the sensation of having what felt like a sizable sum to spend. Almost every big purchase of his came out of these intermittent wins – an inefficient, yet highly entertaining, savings scheme.

To ask about the cybervirtue of fruit machines and the slots that followed them is to enquire whether any positive habits were instilled by engaging with them. I think it fair to say that the case for this is rather thin; even my friends 'gamble to save' scheme is a prop for an absence of prudence rather than anything we could judge as clearly virtuous. The draw in these mechanical entertainments has always been the jackpot – the big win that is always clearly advertised – although the post-eighties variants also draw in punters with an increasing reliance on licensed IP (much as with pinball tables from the eighties onwards) and dazzled punters with elaborate light shows that have all the hypnotic allure of the angler fish, luring unwary critters to their doom.

That said, the deal offered by the slots was clear from the start: a chance to win back more than you lose. What's more, they offer an opportunity to gamble that does not risk creating bad blood with your friends over losses accrued. The neutrality of this form of gambling is part of its appeal: you win, nobody loses (for the operator is assured a profit over the long term by the cut the machine takes by design). If we compare the fruit machine to the more predatory microtransaction videogames, which take similarly small sums of money but offer no possibility of a return beyond entertainment, it is not so clear that gambling is the root of any relevant problem here...

A Hundred Cyborgs, #54, part of a ten part mini-serial on Arcade Cyborgs.