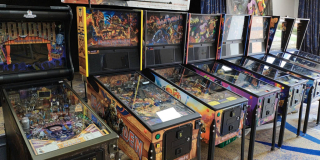 The pinball table evokes even stronger memories of physicality from the dark rooms of my past than the joystick. Here, the very action of play was percussive – the bang, bang of the buttons, struck firmly and with exquisite rhythm, the measured release of tension in the plunger – up to that most violent of resorts, striking the table at just the right moment to save your ball, but with enough restraint to avoid triggering the tilt.

As someone with no aptitude for sports, the pinball table was one of my most physical childhood experiences. It was also very much a communal experience. I would gladly play a videogame alone, but I would not feed coins to a pinball machine without a player two to join me. And if, as our credits ran out, if we scored a match, we extended the communal experience by playing 'a flipper apiece', accepting a higher degree of challenge by splitting the task across two nervous systems, but relishing our achievements all the more because of it. The time we earned a high score upon an Addams Family table is indelibly burned into my memory.

The virtue of the pinball player lies in the prowess, the experience, transferable to a great degree from table to table, of learning to aim with a mechanism wildly inefficient at precision, yet capable, deep in the muscle memory, of a mastery quite beyond the pattern-learning of arcade videogames that is far more a matter of mind than musculature. That, and the camaraderie; we did not play together to compete – victory over the other was tangential, utterly forgettable – it was inherently co-operative for us to play a table together.

My friend and I learned no table as intimately as The Addams Family, the most successful pinball table of all time. It was one of the first to make greater use of microchips and one of the last to rely upon the fundamental pinball skills over gimmickry. Although I greatly enjoyed the Star Trek: The Next Generation table, it was reliant on too many moving parts, and it is hard now to find one in serviceable condition because of it. So personal was our relationship with our preferred table that we, as with every pinball aficionado, knew precisely how to pull back the plunger to score the skill shot every time. It ceased to be a bonus – we were annoyed when we missed it.

Did others bond as we did at the pinball table? Puzzling out the behaviours, learning which drop targets activated which feature; discovering through meticulous trial and error how much force we could apply before triggering the tilt sensor and forfeiting a ball; mastering through patient application the angle and force required to strike a ball to ascend a ramp or sweep an orbit to prepare for a precision shot? Other games were always higher in my thoughts, but nothing is more vivid in my memories.

A Hundred Cyborgs, #52, part of a ten part mini-serial on Arcade Cyborgs.

Pinball was never my thing when I was young. I was instead mesmerized by the video screen and its pixel drawn characters and space ships.

When I did want a break from the Video Games I would take a very short attempt at pinball and I was terrible. I found it so frustrating how the silver ball would so perfectly glide between my paddles. Maybe it was my terrible eyesight that put me at a disadvantage.

The Pinball Arcade for the PS4 has been nice way for me to play some of the tables that I was too intimidated to play. While it is a simulation, it is a satisfying one.

Thanks for the Cybervirtue treatment of Pinball and the arcade. It is fun to read.

Hey Chris,
I don't think I ever felt any good at pinball, but it was clear that I was at least able to learn the table, and that covered up for my evident lack of skill. :) The greater precision that was possible on the videogames fit me much better, but I always enjoyed the pinball for its inherent chaos.