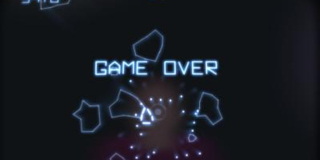 Is there anything that says videogame more than the immortal phrase 'Game Over'? Odd, then, that some early video games did not include it – the 1979 Tail Gunner cabinet, for instance, simply returned to the title screen when you let too many enemy ships get past. The phrase originated in 1950s and 60s pinball tables, which lit up the words with a lightbulb inside the cabinet to confirm that no more balls remained, but even then a light showing 'balls remaining' was more common.

It is quite sobering to think that before the mid-1980s, it was entirely impossible to continue playing a game after either your lives or the timer ran out. For Space Invaders, Pac-man, and Galaga, the last life meant quite definitively 'game over'. Vanguard and Fantasy in 1981 offered the choice, as did the more successful Moon Patrol in 1982, but it did not become standard until Atari's 1985 hit Gauntlet heralded the end of the era of 'one credit, one game' and the beginning of the 'pump and play' era, which let you funnel as many coins as you liked into a single game – the onset and ancestry of microtransactions in games.

To ask about the moral or behavioural effects of 'Game Over' sounds strange – but Gauntlet puts the issue into perspective. Early arcade players such as myself learned to master the cabinets through repetition – and we got extremely adept in the process. By contrast, the Teenage Mutant Ninja Turtles and Simpsons games in 1987 and 1991 respectively were typically (but not exclusively) played by players once, in one expensive, coin dropping session. The arcades did alright out of this arrangement. But lost was that tenacious persistence in the pursuit of mastery that had, for myself and others like me, characterised the arcade experience.

When I worked in house at Perfect Entertainment in the 1990s, we had a close relationship with Sega and there was a House of the Dead lightgun cabinet in our kitchen. A co-worker was surprised that I declined the option to continue, given that we were given infinite credits. I explained that I wanted to get good at the game, and you didn't achieve that by just papering over your mistakes with a continue. Intrigued, he began to play that way, and eventually surpassed my skill with the machine. It may not seem it, but Game Over sculpted a positive approach to the mastery of skills, one I might gainfully compare to the persistence of the skateboarder. Game Over didn't just end the play session: it made better players.

A Hundred Cyborgs, #58, part of a ten part mini-serial on Arcade Cyborgs.