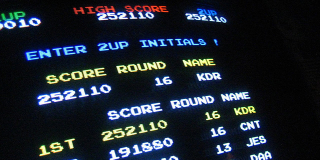 What would the arcade be without the concept of the high score? Striving to beat a target had long been a part of the funfair sideshow, and pre-1940s pinball tables (which did not have flippers, and were more like Victorian Bagatelle) often had target scores to win drinks and the like. Then came the high scores. At first, games like 1976's Sea Wolf (a videogame descendent of Sega's 1966 electro-mechanical game Periscope) offered extra play time for hitting a 'high score', which was a set target. Then, with 1979's Space Invaders, the high score could be saved. By the 1980s, every arcade game – pinball included – offered you the chance to "knock" the previous player off the high score or, as soon came after, off the top of the high score table.

Sometimes, our relationship with technology is so subtle we cannot even recognise that there is a cyborg relationship at all. Even when we engage with games with high scores we might not notice any effect on our behaviour. Yet the high score significantly alters the way we act whenever it makes itself felt – it inflames our natural competitive desires, and focuses us towards a purpose, a goal: to claim the high score. It moves us from mastering a game to undertaking a specific mode of engagement. The high score was the gateway drug to the Achievement system that dominates commercial game platforms today.

When Microsoft first announced Xbox Online at a conference I was attending, I was surprised that they made online ranking such an enormous part of their presentation. It left me cold. When I think back through my own episodes of high score chasing, I was always avoiding directly challenging someone else's high score: I preferred finding those machines with only a daily table and setting the score for that day. I was still being influenced by the high score, I just wasn't letting it draw too deeply upon my competitive side. Even now, when a game gives me a choice to opt in to an online high score, I always decline. I have no wish to reduce my play experiences to mere competition.

For many, the desire to compete is central to their aesthetic appreciation of videogames: for me, there is a negative connotation here, a bad memory of whenever my competitive streak burst through to ruin my enjoyment of a game – or indeed, someone else's. If high scores are a design feature so subtle that their influence is mostly unfelt, or is only a tremor foreshadowing the behaviour-distorting Achievement earthquake to come, there is still a worrying sense, for me at least, that the high score cyborg risks narrowing the rich experience of videogame play to the mere pursuit of victory.

A Hundred Cyborgs, #57, part of a ten part mini-serial on Arcade Cyborgs.