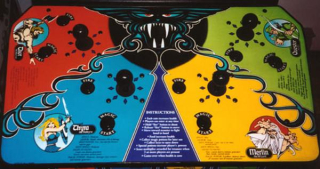 Gauntlet changed the arcade forever, and the moral implications of this shift has both positive and negative implications. From the early forays into co-operative play brought about by player two, the arcade began to discover a whole new realm of play: multiplayer. It meant more money for arcade operators – and indeed, was designed for that very purpose. But it also meant greater emphasis on co-operation, and most of the great commercial successes in the waning years of the arcade's heyday were four player co-op like Teenage Mutant Ninja Turtles and The Simpsons.

It was not the first four player cabinet – Atari had a four player version of Warlords in 1980, for instance – but it was the first game to have co-operation baked into the design. Inspired by Dungeons & Dragons (via John Palevich's Dandy, which had been distributed on the Atari Program Exchange), the game was designed exclusively for players to work together. Yet a lingering competitiveness remained: there was not enough food to keep four players going (after all, for the coins to flow, players must die) so even in a game expressly designed for players to work together, a tension remained.

As such, the moral effects of multiplayer were a distorted Prisoner's Dilemma where no matter how much players wanted to work together, there was always an ever-present temptation to defect. Yet this clouds the core behavioural effect of Gauntlet, one shared by Sega's novel spin on it, Quartet: it made players actively want to play together like nothing before. If pinball always felt co-operative to me, multiplayer co-op removed the metaphor. We sought out new friends to join us in the game – nothing else broke the introverted ice of the early arcade quite as effectively, or as extensively. If there was a commercial motive behind this from the point of view of Atari and the arcade, it did not change the positive impact it had in the lives of those who came together because of its.

Yet even the commercial aspect of Gauntlet's success is arguably more laudable in the context of the arcade multiplayer than online multiplayer today. For Atari's Gauntlet kept alive multiple small businesses (the arcades themselves), providing shared spaces for players to meet and engage socially. Whatever might be said of League of Legends and its ilk today, they are not a socially co-operative endeavour that shares wealth with tens of thousands of local partners, and creates new spaces for play and friendship, but merely a digital funnel leading to yet another giant corporate maw...

A Hundred Cyborgs, #60, the final part of a ten part mini-serial on Arcade Cyborgs.