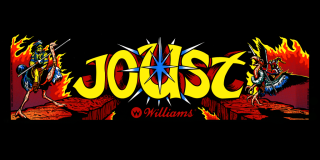 What happens when you add a second player to a game? For most of the twentieth century, arcade games were single player experiences. Yet they still offered, for almost all of that time, the choice to add a second player. The idea that player two would co-operate was not an option in pinball games, and I know of no electro-mechanical coin ops that supported it. Right up until 1980, the purpose of player two was to compete with player one, and if a game supported more than two players it was only to increase the number of competitors.

When co-operative play arrived, it did so against the background of competition. Wizard of Wor in 1980 was a shooting dungeon bash that allowed two simultaneous players, while Williams' astonishing Joust in 1982 was a wild game about knights flying on birds and defeating each other by having the highest lance in the collision. Both allowed players the option to work together while still permitting them to turn on each other and do battle if they so desired. The schizophrenia of this situation was acutely felt by Joust players, who were awarded bonus points for not killing each other in Survival Waves, and points for slaying player two in Gladiator waves. But this was nonsense: I know of no player who enjoyed Joust competitively, nor were the rewards for defection large enough to offset the benefits of continued co-operation.

Joust was, in effect, a failed Prisoner's Dilemma. In the famous thought experiment, the benefits of co-operation are less than defecting, but only if the other person does not also defect. If everyone turns traitor, nobody gets anything. In Joust, the benefits of co-operation outstripped those of defection in all circumstances. What's more, Joust is a better model of co-operation in life than the Prisoner's Dilemma, which is inherently contrived. The lesson of billions year of biology, as Lynn Margulis always stressed, was that co-operation is a more powerful force than competition: a purely competitive world would have resulted solely in specialised bacteria. It was co-operation that brought cells together to make multi-cellular colonies like us – and it was only on a bedrock of such widespread cooperation that competition of the kind player two embodied prior to 1980 could even become intelligible. After all, it is our metaphors that project human competitiveness onto bacteria.

Joust is one of my favourite games of all time. I love it in single player, but in two player it became something even greater: an object lesson in the benefits of working together. Yes, that co-operation is framed in terms of violent competition – you must defeat the enemy knights – and that is true of the vast majority of videogames. But how often do we become cyborgs that are reminded of the value of working together? Every game that achieves this moves far beyond the simple cutthroat rhetoric of player two.

A Hundred Cyborgs, #59, part of a ten part mini-serial on Arcade Cyborgs.