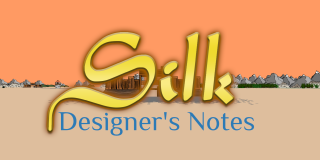 Silk is about Glorantha.

Silk is about religion.

Silk is about Brexit.

Five seemingly contradictory statements, all absolutely true. The fact that all these claims are true doesn’t spring from any conceptual gymnastics, it flows naturally from the way I came to design and ultimately implement Silk, with the incredible help of Nathan (the programmer) and Jamie (the artist), and many others (like Becky, the portrait artist; Chris, the composer; and Patrick and Sean, the producers).

That games are about things doesn’t sound controversial, but in an odd way it is. That’s because the entertainment value of a game (or a film, for that matter) is the moral value we elevate above all others for them – provided a game entertains, all other priorities are rescinded. That’s why games are a multi-billion dollar industry today: not because they are a vibrant, extravagant, hugely inventive artform (although they are), but because they entertain. And who doesn’t like being entertained? By definition, it’s something we all want.

But it’s not enough of a reason to make a game like Silk, because the people who might be entertained by a game like this are not the same people who are going to be entertained by, say, Grand Theft Auto, even though the GTA franchise and Silk have their roots in exactly the same places: the British games of 1984 and 1985 that invented the open world before anyone had thought of calling it that. No, Silk is a niche game... it’s a game for players who are looking to be more than just entertained, who are willing to be challenged to take upon a new way of thinking, one quite different from those that most games present us today.

We should start by acknowledging that this is a game about 200AD. This is a time period I’ve always been enraptured by... the Roman republic has mutated into the Roman Empire, bringing the seeds of its eventual downfall. Thousands of miles east, the Han Empire are about to lose control of China as it slips into the vicious civil war known as the Three Kingdoms. And in between these two ends of the Ancient Silk Road are two other empires that people just don’t talk that much about – the Parthians, who are Rome’s bitter enemy (and whom Rome never convincingly defeated), and the Kushan Empire who rule what we now call India with a cosmopolitanism that is quite astonishing for a time two millennia before our own. To play Silk is to visit 200AD. That’s the player experience we’re offering, over and above any other themes I might have weaved into its narrative design.

I’ve been writing Designer’s Notes since 1993 for every game that I can definitively call ‘mine’ (without denying my immense dependence upon those who work alongside me). I was inspired to do so by Sandy Peterson, the designer of Call of Cthulhu (and level designer on Quake), who first made it clear to me that pretending you’re not influenced by other people’s designs is pure arrogance and folly. In this five part series of Designer’s Notes, I want to look at five things Silk is about. The first, as I’ve just discussed, is 200AD. I’m not going to say too much about that because if you want to know about 200AD you should play Silk – short of a time machine, there’s no other way of experiencing it! But the other four thematic influences upon Silk – 1984, Glorantha, religion, and Brexit – those are things you probably aren’t going to get out of just playing Silk. They require me to tell something of the story behind the game, and that’s what Designer’s Notes are ultimately about. These are the notes I want to make about the most personal game I’ve ever made.

I hope you’ll join me for this journey.