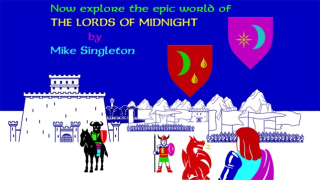 In 1984 and 1985, amazing things were happening in the British videogames industry. The following year, Japan would overshadow this with titles like Metroid and The Legend of Zelda that transformed videogames forever by having the ability to preserve player progression (the genesis of save games), but for these two years nobody anywhere in the world can match the inventiveness of British bedroom coders.

One of these stories is well known... David Braben and Ian Bell made Elite, which with its vast feeling of player freedom would go on to directly influence Grand Theft Auto, and thus give birth to the open world genre as we now know it. But even that’s not the whole story, because Elite is a descendent of tabletop role-playing games, specifically Traveller and Space Opera, and it was the infinite agency of the tabletop RPG that inspired Elite’s radical approach to digital agency. It’s always a mistake to think videogames sprung into life from nowhere... they flowed down the river of artworks like everything else.

Two other great precursors to the open world game that came out of these two years are both from 1985: Andrew Braybrook’s Paradroid – which I still suspect was an influence upon Grand Theft Auto’s car stealing (although I have not yet proved it), and Paul Woakes and Bruce Jordan’s Mercenary, that took Elite’s wireframe world and made a fantastic story out of it (Surely the faction system in the original GTA was inspired by this game...?). Paradroid is actually my favourite game of the last century, but I don’t feel quite the sense of debt towards it as I do to another 1984 classic, perhaps because I got to work with Andrew Braybrook and Steve Turner in the waning years of Graftgold, and so our stories already intersected in some way.

The last of the four harbingers of the open world is Mike Singleton’s The Lords of Midnight, the best adaptation of The Lord of the Rings to never have had the license. Singleton was not influenced by tabletop RPGs as far as I can tell, but was just interested in how to take the two threads of Tolkien’s epic – the adventure story and the epic war – and represent them in the 48K of the ZX Spectrum, Europe’s most iconic home computer. I was spellbound by The Lords of Midnight, even though it was actually terribly difficult to play, and even more difficult to play well. My appreciation of what it achieved grew when I started giving talks about the history of games, and peaked when I finally sacked Ushgarak (let’s not call it the Dark Tower of Mordor...) in Chris Wild’s outstanding port of the game.

Singleton did not rest on his laurels. The open-world-before-open-worlds concept was revisited in a sequel, Doomdark’s Revenge (which also has a fantastic port by Chris Wild) and later in Midwinter and its sequel, games that moved into polygonal 3D and were equally astounding, perhaps even more so, since they attempted the immersive presence we now expect from first person games before the hardware was in any way up to the task of rendering them. But there was just something about that square-based world in The Lords of Midnight that maintained its magic. It’s a mystical wonder that can also be found in Eye of the Beholder and The Bard’s Tale, which also built their world on squares, although both had so much more computational resources available that they cannot possibly count as the technical achievement that Mike Singleton’s classic was.

I felt a debt of honour to him. I don’t really know why, but I always have. In the 1990s, when I was working on the Discworld games, I tried to make a game in that style, but it was impossible to make the argument for it then. It’s not that much easier now, to be honest! But at least now we have a thriving indie community who sometimes welcome the strange and wonderful into their hearts. So I made Silk, to pay off that debt to Mike Singleton. It’s why even though the game is set in 200AD, it’s also inextricably about 1984.