Silk is About... Glorantha 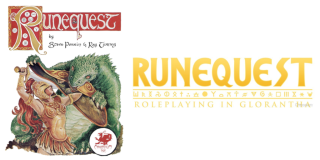 Knowing I wanted to make a game in tribute to The Lords of Midnight, the question was: how? Because making a direct spiritual successor to it was clearly not going to work – Legions of Ashworld had already tried, and it had struggled because it was solely fans of the original who could possibly appreciate it. No, if I was going to create a game that spoke to why The Lords of Midnight was important to me, I was really going to be making a game about a square-based map. It was mapping, and using other people’s maps, that made those early game experiences for me, and this was especially so for The Bard’s Tale, which I painstakingly mapped by hand with graph paper, and then took great pleasure in my friends using my maps to complete the game after me.

So I knew I wanted to make this tribute game about exploration, but I also didn’t want to pass up the opportunity to experiment with radical unexplored possibilities in narrative design, and for this I had another influence: King of Dragon Pass. I had always regretted ‘missing out’ on RuneQuest, possibly the only classic 1980s RPG that I never got to play. King of Dragon Pass let me participate in Gregg Stafford’s extraordinary game by having been set in the world of Glorantha and being, in a very tangible sense about Glorantha. To play King of Dragon Pass is to enter into a fantasy world that’s not like any others out there... it’s more Bronze Age than Medieval, it’s a world where gods and spirits are tangible and pressing in on mortal life. David Dunham’s game is an incredible achievement, one that came to my attention because my colleague at International Hobo in the 2000s, Ernest Adams, waxed lyrical about its achievements in narrative design.

But what I really fell in love with in King of Dragon Pass was the Clan Ring, the set of people who advise you as to what decisions you could be taking as the game progresses. I became obsessed with how this worked, and dug into its designed systems and internal language (OSL), becoming ever more convinced that what was ‘just’ another clever extra feature in that particular game could become the central element of a narrative design that was based upon an entirely different kind of play. Perhaps, the kind of play that would see the player striking out across three million square miles of wilderness....

The Clan Ring in King of Dragon Pass became the Advisors in Silk. They’re your party, you hire them to your Caravan, and once you hire them they’re with you until the end of the game. That wasn’t how the design began – for a while, the paper design allowed the Advisors to die if they failed a skill check spectacularly. But as time went on, I came to realise that what I was doing with Silk in terms of letting the player explore the cultures of 200AD (just as King of Dragon Pass lets you explore the culture of Glorantha), was stronger in some ineffable sense if your Caravan was more than just a set of interchangeable pawns. The Caravan is your family in the game... and by necessity, it’s going to be a family of misfits, just like every party of adventurers in RuneQuest. That’s something that speaks to me as a player of games, and a lover of the strange. It’s why even though Silk is set in 200AD, it’s also in a strange but understandable way, about Glorantha.