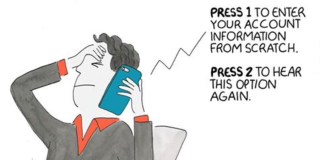 "If you want to listen to short loops of popular music interspersed with insincere reassurance that you call is important to us, press 1." Of all the uses we put our robots too, perhaps the most banal is the phone maze. It serves one purpose: to prevent you from talking to a human if at all possible, and - all to frequently - to ensure that if you do, it will be someone far from any kind of influence inside the organisation. The phone maze is a Chinese Wall intended to keep you out.

Now it might be objected that the phone maze is necessitated by the volume on of calls corporations have to deal with... in other words, the phone maze is necessary because corporations are necessary. This is effectively an admission that we have created the circumstances where wealth and power can accumulate, and thus that we live in an effectively feudal arrangement where our fealty to large organisations need not be affirmed because it is always assumed. It is always at the very least possible, however, that organisations could be more widely distributed, that instead of shareholder profit, superior wealth distribution could be pursued. If this is accepted, the phone maze is not some dismal inevitability but rather a cost-saving mechanism that allows fewer or cheaper systems to substitute for the more expensive alternative: more humans and fewer robots.

Alas, this is not even the most tragic aspect of the phone maze, for in a great many cases (especially those involving international outsourcing) even the humans are forced to be robots. The use of programmed flowcharts and pre-scripted messages makes even the human cheese at the centre of the phone maze robotic in its function, robbing workers of their autonomy and reducing them to mere cogs in a grand machine meant to keep the outside world disconnected from anything an organisation is doing. Even if we do not want to distribute wealth less inequitably, we can scarcely claim to hold humanity in respect when we are complicit in inflicting terrible working conditions upon strangers - and in this regard, working in a phone maze is not even the worst form of wage slavery being inflicted.

In terms of its effects upon humans, the phone maze has the same behavioural influence we encounter in so much bureaucracy - it installs either irritable anger or bored submission. The only plausible defence for these labyrinths of tedium is to argue for their inevitability, a rhetoric I reject as lacking in imagination. If corporations genuinely respect their customers, as they all publicly claim to do, they must learn how to treat them with respect. That might begin by treating those condemned to work inside the phone maze as the human beings they are.