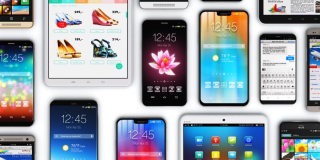 "I have to upgrade my phone" is something we hear a lot these days. A telephone, strictly speaking, only needed upgrading once or twice over the entire century of their operation: to get a standardised connector, and to add touch tone noises. But the phones we talk about upgrading now are not just devices for communicating at a distance, they are the robots that convey the greatest volume of cyborg capacities upon us, for the link us into a vast global network of computers - the internet, and with it 'the cloud', myriad banks of computers offering remote computing and data storage capacities.

If we pause to ask about the moral and behavioural effects of upgrading, we are likely to be misled with shallow claims of utility. New phones are 'better', we assume - an assessment based entirely upon our personal desire for power and convenience. They are certainly not better for the environment... in their manufacture, in the construction of the radio tower infrastructure required to support them, in the ever-growing power requirements of the servers working behind the scenes to make each upgrade effective, each upgrade does more and more damage to our planet, all quietly unnoticed as we goggle at so-called Live Pictures (merely 3 second videos that increase our data usage further) or radar gesture controls. New technology is impressive when viewed through the eyes of its marketing story, and horrific if we look instead at the environmental impact of acquiring the lithium that makes claims like 'longest ever battery life' possible.

And we are habituated to upgrades, we view them as at the very least inevitable, if not also highly desirable. Any concept of maintaining our smartphones to keep them in service is off the table. I am writing this on an iPhone I have managed to keep in service for about seven years, despite Apple's best efforts to force me into replacing it... but it's dying. Its charging port barely functions and it is close to senile as the ever-rising expectations for computing power mean it can barely display 'upgraded' webpages on its antiquated operating system. My Twitter app still uses the 140 character limit, and can no longer show the threads of conversation. A great many other apps have stopped working entirely. But it is still my phone, my responsibility, and I will not abandon it prematurely. I already have a replacement, a hand-me-down handset I hope to keep going for many more years, but I will hold off making the exchange as long as I can. I feel a duty to my pocket robots, not because they're alive but because my decision to adopt them affects everything that is alive.

When we meet someone who has just 'upgraded' their phone, we might idly remark "that's a good phone", meaning it has ever-more capabilities, while ignoring the ever-growing costs entailed. Frankly, I do not think we have any conception yet of what a 'good smartphone' might be.

Poetically, my old iPhone died this morning, peacefully running out of charge a few hours before this post ran...