Silk is About... The Designer's Notes
A Hundred Cyborgs Continues... 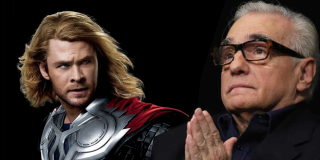 Veteran film director Martin Scorsese could scarcely ask for better publicity for his new film, The Irishman, than picking a fight with the box office powerhouse that is Disney's Marvel Studios. In an interview for Empire magazine, Scorsese was asked about Marvel movies and replied:

I don’t see them. I tried, you know? But that’s not cinema. Honestly, the closest I can think of them, as well made as they are, with actors doing the best they can under the circumstances, is theme parks. It isn’t the cinema of human beings trying to convey emotional, psychological experiences to another human being.

This is a much more interesting statement than it might first appear. Before delving into it, however, it is worth acknowledging that Scorsese would never have had anywhere near as much coverage for his new feature if he had not decided to position himself against one of Disney's two big-ticket purchases both of which were acquired to fill a gap in the media corporation's portfolio, which was always lacking in action franchises. I don't think it greatly matters if this is a planned PR manoeuvre from the 76-year-old director, or a lucky striking of gold by one of Empire's writers, either way it's a win for both parties since the battle line it draws guarantees more attention for both of them, and mobilises the legions of Marvel fans for free publicity, since negative reactions online – especially those guaranteed to travel far – have nearly the same effect as ploughing millions of dollars into marketing.

But I do not mean to suggest that Scorsese is disingenuous in his remarks – indeed, as critic Jed Pressgrove remarked to me on Twitter, there really is nothing enormously surprising about these comments in terms of the discourse surrounding films. That's because it has long been a tenet of what might be called 'serious' cinema that there are two competing forces in the movie theatres. This 2016 blog post by filmmaker Rob Hardy poses this divide in terms of 'films' (Scorcese's 'cinema') and 'movies' (Scorcese's 'Not cinema'), and there are hundreds of similar claims spanning decades. What is at heart here are implicit aesthetic values and the practices that those aesthetic values belong to. Representatives of cinema or film are claiming the artistic high ground – often falling just short of outright saying "we are art, you are not", but always implying it – and contrasting their craft against 'movies', which are not actively represented by anyone in this argument but merely the mass market shadow of the practice that Hardy calls 'filmmaking'.

When film critic Roger Ebert declared that videogames could not be art, or when disgruntled gamers declared Dear Esther was 'not a game', these claims were undergirded by specific aesthetic values and, along with this, participation in the practices that sustain and embed those values. Dear Esther was 'not a game' to anyone for whom 'games' were either the aesthetic pursuit of victory or of problem-solving, an aesthetic camp explored beautifully by game scholar Jesper Juul in his book The Art of Failure: An Essay on the Pain of Playing Video Games. Coming at the matter from this territory in the aesthetic landscape all but requires the erection of a barrier: the Chinese Rooms ingenious usurpation of the components of first person shooters for something radically novel had to be 'kept out' of games because of a felt need to valorise different aesthetic values, those associating games with challenge where something like Shadow of the Colossus might be pointed to as an exemplar. This is the videogame mirror of Scorcese's 'not cinema', which is also Hardy's 'film versus movies'.

Writing centuries before either films or videogames, the Enlightenment philosopher Immanuel Kant made a crucial point about our aesthetic values: that when we assert them, it is because we expect our judgements to have universal assent, or rather we behave as if they should be capable of garnering such agreement. As a result, when something transgresses our aesthetic values – when a Marvel movie is claimed to be cinema (for Scorsese) or Dear Esther is claimed to be a game (for certain gamers), there is an aesthetic transgression, and just as we would baulk at a moral transgression, there is potential for outcry, opposition, and argument. The disagreement, however, is usually hollow since two positions divided by distinct values never connect in any meaningful way. As Kant observed: it is a 'commonplace' that everyone has their own taste, and also that 'there is no disputing of taste'.

Thus there is no need or purpose to Marvel Studios' myriad fans stepping up to the plate to try to defend the Marvel Cinematic Universe by pointing to examples of movies in that corporate megatext that meet Scorsese's apparent definition of cinema in terms of conveying psychological experiences... as Hardy puts it, the question goes to intention not outcome, and I would further suggest that what lies at root here is participation in a particular tradition, a distinct practice of making and engaging with films that is not rooted in entertainment, for all that it is frequently marketed successfully as that. Besides all this, Scorsese is surely correct to compare everything that comes out of Disney's corporate process to theme parks, since this is the practice that the House of Mouse pioneered and is still engaged in: an applied psychology of commercial entertainment rooted in meticulous brand management. In this regard, Scorsese's point is nearly impossible to rebuff and comes down to a claim about the limits of authorial intent: whatever filmmakers might achieve in a Marvel Studios movie cannot change the fact that what has been made is the result of a tightly-managed corporate process of engineering both brand and entertainment value on an industrial scale. Our only choice is whether this matters for our enjoyment of what results – and this depends upon which practices we ourselves are engaging in when we go to the cinema.