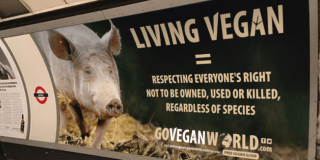 The slaughterhouse is perhaps the ultimate symbol of contemporary farming, a factory that turns animals into meat, while insulating meat-eaters from the brutal world of mechanised killing inside - a black box for carving flesh. The vegan asserts the moral superiority of refusing to form any kind of cyborg with such barbarous technology... but it’s far from clear that the political vegan community has plans for a better life for farm animals. Rather, it seems as if the logical extension of vegan opposition to the abattoir might risk extinction for farm animals.

Recently, a political vegan organisation ran a series of ads depicting sheep or pigs and vouching that veganism was thinking about the animal as a being and not a thing. This struck me as a poor way to argue for a vegan diet: considering the growing value being placed on environmental impact, this tack would seem to make a more compelling case against eating meat. But the biggest problem in the rhetoric being offered in these ads seems to be: what is the endgame for these animals? If we all turned vegan, where do they go? I’ve yet to hear a satisfactory answer to this, and what I've been offered varies from utopian visions about turning farmland back into open pasture to apocalyptic arguments that suggest that because we have bred these animals to be dependent upon us, they should simply become extinct once meat farming ceases. There’s certainly no consensus among vegans on this, but the fact that extinction is even a possibility draws doubts upon the idea that the abattoir necessarily represents the worst fate a farm animal might encounter.

The challenge I’m making here is not about the vegan diet, which strikes me as virtuous in important ways, particularly in terms of the prudence of taking only what you need to live. Yet the question of whether the abattoir cyborg or the vegan offers a better life for farm animals appears to be open for a debate that in fact never happens. It doesn’t happen in part because of our habitual shallow thinking on food, and in part because of prejudice against vegans, who (like Marxists and Christians) are all too often presumed to be irrationally militant (alas, more confirmation bias in action...). There is as much an appetite for publicly debating vegan philosophy as there is for engaging Christians in debate on abortion metaphysics, and for similar reasons: few believe the discussion is even possible, let alone desirable.

The late Mary Midgley remarked that she was much less concerned with stopping people from eating meat than in ensuring that animals were well-treated while they were alive. I share this view. Even as someone who avoids eating meat, I still would not hope for the elimination of the abattoir, fearing that this might lead to the ultimate extinction of all farm animals. Rather, I would hope for us all to strive for deeper views of the impact of our choices.

I think you're confusing the continuation of the species with the happiness of each individual creature. If the species goes extinct, that doesn't create any additional suffering for any creature. So what is wrong with extinction?

Hi GriddleOctopus,
You seem to be using Consequentialist/Utilitarian ethics here, attempting to perform a 'hedonic calculus'. But this approach to assessing extinction is surely fallacious... as Parfit explored in Reasons and Persons, it cannot be the case that the best way of maximising human happiness is to bring about the extinction of all humans, no matter what the mathematics suggest. The same argument extends comfortably to other animals.

While it is true that an extinct species cannot suffer, that does not provide a compelling argument for extinction. If it did, this would provide an ultimate solution for human suffering... but I hope that you shall not be arguing for this! :)

Thanks for engaging in the debate on this one!

Being a vegan, I am saddened by factory farming and the use of abattoirs. Not only do they cause extensive suffering to the animals but they also impact the environment, using tonnes of water and acres of rainforest to ultimately accommodate our sensory pleasure of taste. I don't think it's ethical to cause suffering and death for our pleasure.

I don't believe that the farm animals will go extinct if all humans became vegan. I've read about ex-dairy farmers sending their cows to sanctuaries after befriending them. Perhaps people would own pet farm animals if they lived in the countryside.
Yes, there will be a decline in the 'production' of these farm animals but they will live on in the protection and aid of humans.
I'm sure vegans and other animal lovers won't allow the extinction of these treasured animals.

Hi Mika,
The environmental impact of meat farming is, for me, the strongest argument against it. Although it is, strictly speaking, an argument for eating less meat, not necessarily for ending meat production.

There are indeed sanctuaries for farm animals at this time... although they would certainly not be able to accommodate all the farm animals if meat farming were to come to a crashing close 'overnight'. It's not implausible that some farm animals could survive in sanctuaries going forward, although how many could survive this way is an open question. Almost all sanctuaries operate as rescue centres; these are not facilities that could operate long-term to keep a species with us. Something fundamental would have to change.

Honestly, I still think it more likely that farm animals' long-term survival as a species is intertwined with farming. It's not a popular viewpoint among non-meat eaters, but I find it hard to escape.