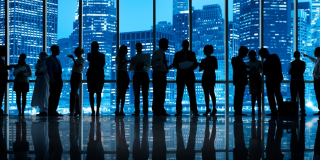 Depending on your political stance, corporations are either the architects of a higher quality of life for everyone, or a pernicious monopolising power that has devastated our planet and widened the gap between the rich and the poor to an unfathomable degree. These stories are supposedly opposed to one another, yet both are correct, and neither captures the essential truth at the heart of the corporate world - that we ourselves are the lifeblood of the corporations, and we can no more overthrow them than we can defeat our right hand with our left.

The story of the little person against the giant, unjust organisation has been a stock plot ever since the industrial revolution, when what has become the corporation came into existence. Don’t be fooled by stories like Robin Hood that seem to throw these themes further back in time: this mythos chiefly emerges in the nineteenth century, admittedly with roots in folklore. We like to link tales of overthrowing tyrants to the science fiction and courtroom drama theme of beating the corporation but the vast difference between these scenarios is that the former involves the defeat of a person, while the latter entails the overcoming of an intimate network of beings and things. Only the emotional overtones connect here; David and Goliath is about two men of vastly different strengths, it has nothing to do with the ways we now project this theme onto anti-corporate propaganda.

Anti-corporate propaganda, moreover, that is primarily made by corporations, as the vast majority of our media necessarily is. There’s no deceitful double handedness involved here: Disney can sell us noble tales of underdogs defeating evil empires without a trace of irony, because to Disney corporate executives - indeed, to a great many executives in all manner of corporations - there is a sure and certain confidence that they are acting towards good ends. Thus, there is no perceived conflict in depicting the downfall of evil organisations that are clearly someone else... Disney, like Google, like Facebook, like Apple, are certain they are striving for a better world. The problem is always somewhere else.

And so it is for us, too, we corporate cyborgs who cannot go an hour without making use of the products of scores of corporations, usually without a moment’s thought. The problem is always somewhere else. Yet if it is true, as I suggested at the start, that the corporations are destroying our planet, then it is us, the corporate-empowered cyborgs, who are doing it. The trouble with the valid claim that corporations have raised our quality of life is that this inflation in comfort was paid for in environmental devastation; we have failed and continue to fail to account for the terrible costs of the conveniences we unthinkingly enjoy. This is not a story than ends with us overthrowing corporations: it can only end with either our commitment to change ourselves, or by resigning ourselves and the world we are part of to eventual and inevitable oblivion.

To the extent that we have a choice (and in some areas like trains or water pipes we don’t) I agree: our choice to give them our money enables them. This is made more difficult when so many corporations are subsidiaries of other, bigger, corporations.

In the old days when big market cap companies paid dividends I think this situation was healthier because a lot of that money came back into the economy through wages, supplier payments, and dividends. Now though it seems to be pooling in off-shore accounts and your supplier is more likely to be a subsidiary closing the loop. It certainly isn’t coming back in corporation tax.

I think this is a bit like our elections. We get the politicians we vote for, despite it seemingly like we make poor - big picture - choices. We get the corporations we pay for I think. And that’s before we get to monopoly power and corporate lobbying.

I think it darkly amusing that the Movement, and the faux cyberpunk genre that is all that survives of it (cf. Cyberpunk is Dead), always saw megacorporations as the new powers that would dominate city life as they were stronger than governments. But it turns out that this would be far too much hassle for them. Rather, the giant corporate organisations want nothing to do with human life as it is lived at all, but merely want to accumulate vast pools of capital, like Smaug upon his treasure pile. And as you say, they wish to do it in offshore holding accounts where they can avoid paying for the infrastructure they use. In this regard, this kind of corporation - which we might call the parasitic megacorporation - is entirely unethical, whether looked at form virtue, rights, or outcomes.

Thanks for commenting here! And apologies for the abysmally slow turnaround time on replying.