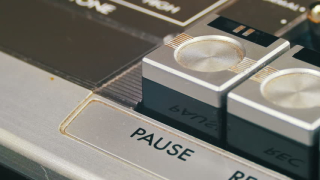 It was with the advent of tape recording that the ability to pause became possible. Records had to keep spinning, but the reel to reel tape deck could be frozen instantly. This capacity was inherited by all tape cassette technology, and thus we discovered for the first time we could pause recorded television, and then with digital video recorders, pause live TV. The pause function is now so standard as to constitute an expectation rather than a novel new power: the media world will wait until we say it is time to continue.

What are the moral effects of the power to pause? There are perhaps two tacks we can take here. Firstly, the negative: the accusation that we expect to be in control of our media environment, and indeed can become irritable when we are not. But the capacity to pause is only a small part of that desire for control, and not the pivotal element when compared with the world of near-infinite choices unleashed by digital media distribution. On the positive: being able to pause allows us to interrupt our media to pay attention to the humans around us - although I must say my sons require quite a forceful command to pause the videogame they are playing and break out of its imaginary world!

What strikes me most about our capacity to pause is the contrast with those situations where pausing is neither possible nor conceivable: the movie that runs whether we are watching or not, the stage play that strives to be immune to the audience's presence, and even those multiplayer videogame where pausing is not a viable option. In such cases, we take upon a more intense focus upon our activity: we give a film, or a play, or a game our undivided attention and may even become flustered when required to make a break perhaps in part because we cannot pause. However, the auditorium provides a venue where we do this together, and there is something about this which renders the experience respectful. In an online multiplayer game, by contrast, we play alone together: respect is never a given, and the basic psychological foundation for online play might even be a thick skin to survive the intermittent abuses of those players who have forgotten how to behave respectfully.

Pause allows us to break out of an experience. Its absence commands a more intense experience - when we share that experience in person, this can give us a more congenial relationship to both the media and its audience. It is only when we engage in our media alone that pause and its absence seems to feed our more selfish tendencies.