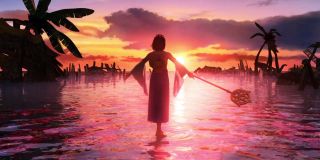 Okay, you’re thinking, now I’ve surely gone too far in suggesting there are moral and behavioural effects to movie-like cut scenes in games. But precisely the nub of this serial, A Hundred Cyborgs, and the book The Virtuous Cyborg that inspired it, is that if we take seriously the cybernetic aspect of technology, everything is amenable to an analysis of its effects upon us, and that we are deceived when we dismiss this exploration out of hand as having nothing to tell us.

The CD-ROM opened the door to the cinematic, by massively expanding the available storage space. This in turn had at least two significant effects with moral implications. Firstly, it allowed games to develop stories that were closer in form to movies, thus reneging on the potential of the player as an active moral agent in game worlds. Movies and books work as centres of moral reflection precisely because the outcomes of their events cannot be changed. Yet the more a game uncritically echoes this form, the less an effective form of moral reflection it can be, because rather than witness the tragic mistakes of others play out in calamity we must be tricked or tram-lined into making them ourselves, or avoid moral reflection upon our mistakes entirely. Even attempts at branching narratives in games do not assuage this problem - they simply escalate the development costs while providing pre-proscribed choices to help conceal the problem. How often do we encounter a narrative choice in games where all outcomes are equally satisfying? Branching story writers all too frequently have to implement the weaker dramatic choices as well as the good ones.

Which brings us to the other cost of cinematics: that of implementation. Movie studios apparently manage to mostly avoid grotesquely abusing their staff, but game developers do not. Everything that raises the scope of game development tightens a noose around the employees of game developers who have to deal with the complexity of a medium that cannot simply be broken down into ‘shots’ and accurately costed. How many of the fans of The Last of Us, a game dependent upon vast linear sequences of cinematics interspersed with that amoral videogame chestnut ’necessary murder’, paused to reflect upon the working conditions of those who made that material possible...?

Ironically, games are more than capable of enhancing our moral reflection when they engage with player agency. But the presence of pre-scripted cinematics - the dependence upon the narrative language of action movies that also trade in ‘necessary murder’ - invariably contests player freedom and thus the opportunities for reflection upon our actions in the game world. But perhaps that's not the main issue with cinematics. The mythos of ‘technological progress’ is so very effective at concealing the concomitant moral regression that follows inexorably (if not inevitably) from escalating the resources required to bankroll that ‘progress’. The cinematic indexes this phenomena in the videogames industry. And we eat it up, because we desire the fruits of these vines even as they strangle us.

A Hundred Cyborgs, #79, part of a ten part mini-serial on Gamer Cyborgs.

Great point - I had never considered the role of cinematics in reducing player agency and how that reduction can have a negative effect on moral reflection. However, cinematics do have an upside (for moral reflection) - they are a pretty good tool for providing players with information/content that helps them frame/situation their understanding/interpretation of the game - and this can undoubtedly help with moral reflection. For example, they can help bring depth/nuance to NPCs that are incapable of exhibiting more complex behaviors when "in-game" for example - thus helping players empathize with them, etc.

Hey ALL CAPS José!
You're absolutely right! I broadly support the use of cinematics in the opening stages of a game as a means of dropping players into the world. Here, as in so many other cases, there is a balancing act between two extremes. But I think much of what is made with cinematics in videogames meets Ernest (Adams)'s criticism that the game developer's secret desire to be a filmmaker is toxic to games as an artform...