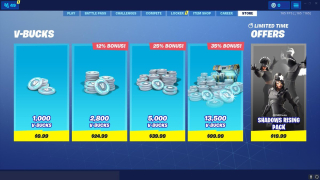 The free to play business model is the latest twist on variable pricing, a practice that goes back to the earliest commercial videogames - arcade games took your money one coin at a time. The original concept of digital microtransactions (as the name implies) was to provide a contemporary spin on coin drops, by taking a small amount of money at a time. Rather than pay per play, as coin ops did, free to play games offer their base gameplay for free and found ways to ask for payment for other things. This varies from the scurrilous monetisation of frustration, where the game intentionally impedes the player and offers to restore progression for money, to the more ambiguous sale of cosmetic items.

Many players are horrified by free to play monetisation - partly because much of what they used to get included in the price is now charged for, and partly in resistance to the feeling of being shaken down by their entertainment like a virtual beggar lurking in the machine. However, since the game is coming for free, direct comparisons with games as paid products swiftly break down. These are practically distinct forms of media, designed and played in different ways, for all that some players are in the markets for both. A great deal of offence, however, is caused by the encroachment of microtransactions into paid games - a topic warranting a separate discussion that I will pick up next time.

What is often overlooked about free to play is that the vast majority of players are indeed playing for free. Paid players are only a few percent of the audience of most these games. Many of these players, the so-called ‘whales’, drop several hundred (or even thousand) dollars into the games they pick up... the surprising truth of the matter is that wealthy individuals are subsidising the poor in the market for free to play games: what looks from the perspective of an individual player like the epitome of capitalism transpires to be the most socialist market economics yet realised.

Yet still, we are not happy. Some players are getting all the perks and privileges while others scrape along with nothing, albeit without having to pay anything for many hours of entertainment. The trouble is, the game has to make the whales want to pay, but they can only do so by pressuring every player to pay, either through borderline abusive designs or through the inevitable peer pressure that says you can’t be seen with someone in a ‘noob skin’. Our desires are being manipulated, our greed aroused. Yet this is the psychological profile of the contemporary marketplace everywhere we look. Does it not count for something that in free to play games - and only in such games - the wealthiest 1% of humanity are subsiding their inestimably poorer neighbours? If we are horrified by this, shouldn't our outrage be directed at the vast wealth disparity that has been made apparent by such games, rather than the games themselves...?

A Hundred Cyborgs, #71, part of a ten part mini-serial on Gamer Cyborgs.

It may not surprise you to know that I have thought hard about this issue. The area that worries me most is that while the "whales" do indeed subsidise the free players, this doesn't mean they are the wealthiest players. We can't (and shouldn't) know that.

When I do the thought experiment, I consider there are three groups of people likely to pay:
- Those who are enjoying the game and get value from their purchases, best evidenced by repeat purchases and a lack of buyer's remorse (if provable).
- Those who have so much money it doesn't matter. (Bigpoint famously had a Premier league footballer who claimed to have spent of $3m in one of their games)
- Those with poor deferred gratification control. This is based on the (flawed) marshmallow experiment that a) tested if kids were good at not eating the marshmallow in front of them in return for a reward of 2 marshmallows 10 minutes in the future and b) tracked those kids through school and college success to determine that those who were good at resisting marshmallows were also good at navigating the education system.

There is a correlation between poor deferred gratification and poor life outcomes (health, wealth, jobs) etc. There is a possibility that F2P games are not subsidised by the wealthy, but by those by poor impulse control (and the techniques used to target those people that you mention in your post).

It's not conclusive, but it makes me query your socialist assumption above.

Hi Nicholas,
You're right to question my assumptions, as there are a lot of unknowns here. Our positions have somewhat changed on this matter, since in our earliest discussions I was the sceptic! But I laid out, after our conversations, a set of criteria for investigating what was going on with free-to-play, and few if any of my warning flags have been set off, giving me more confidence that a good proportion (although probably not all) of the money being raised in free-to-play is coming from wealthier players.

The issue you raise about deferred gratification is an important one. Economists and psychologists (in their usual desire to make terminology more complex!) talk about 'hyperbolic discounting'; a tendency to view future rewards as conceptually lesser than immediate rewards. I don't doubt this plays a role in loot boxes - which I separated out from the discussion intentionally, as in this specific case I don't think we are seeing the rich subsidising the poor. I'm not sure it's as big a factor in other kinds of free-to-play monetisation, but I certainly can't rule it out either.

Every developer I've worked with in free-to-play thus far reports the same broad data; massive spending disparity in a small percentage of players; that the income from the whales outstrips the income from other paying players by orders of magnitude; and that these players are not the ones raising the alarm re: spending through fraud channels (i.e. they are not kids spending their parents money, or if they are, the parents can afford it).

My concern for many years has been that we would see a raft of spending complaints using fraud measures etc. but - outside of loot boxes, at least - this hasn't been the trend I've seen. I am now more confident about non-loot box free-to-play than I was when we first began debating the moral dimensions of this business model.

Certainly, this piece is written from a bolder perspective than would stand up on balance, and you are right to push back against that. This comes from the 500 word limit I've imposed on the #100Cyborgs pieces, and also the desire to provoke conversation.

I do think we should be taking steps to moderate the situation in free-to-play, and the recent white paper by TIGA is something that I was very glad to see appear. But I am increasingly confident that a large amount of the money coming down non-loot box free-to-play monetisation channels is coming from wealthier players, as I allude to here.

It would be great, for everyone, to see some wide ranging research to contextualise this issue better - but at the moment, we can only wait and see if this is going to emerge. I certainly doubt the big publishers are going to fund such a report, or if they do, it seems doubtful they will share the results with us! Universities are not, sadly, as interested in free-to-play as a research topic as they ought to be...

As always, thanks for engaging me on this issue! You have been a consistent source of illumination and a welcome foil on these topics over the years since we both started thinking about it.