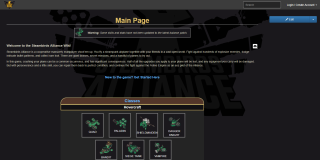 When people talk about ‘next generation’ games and game platforms, they frame the discussion in terms of hardware progression for visual rendering, hard disc storage, and so forth. But games are more than just their hardware substrate. They are a set of community practices, of the developers, and especially of the players. I can’t say the endless step up in graphics quality impresses me, since the main consequence of this isn’t ‘progress’ so much as escalating development costs and consequent regression of quality of life for game developers. What does impress me, however, is something others might not even think much about: community-led game wikis.

My criticism (and praise) of the Wikipedia is laid out in Wikipedia Knows Nothing (available as a free ebook - a quick read and worth a look for its novel concept of ‘knowledge’ alone). But precisely the limits of Wikipedia as an alleged alternative to an encyclopedia are the strengths in a game wiki. You can’t sanely want the geeks of the internet fighting over which corporate media trivia to index when you want access to reliable knowledge on arbitrary topics (under any conception of ‘knowledge’), but when it comes to pooling information about a videogame, nothing could be more perfectly suited to the task than an army of dedicated fans pitching in. Even the potential for pointless argument is effectively curtailed by the common focus and the precision of scope!

In the early days of videogames there was no internet and our source of supplemental information were game magazines. These did a fantastic job, frequently with direct support from developers (Nintendo counted on magazines to distribute secrets regarding 1986’s Metroid and The Legend of Zelda, for instance) but often they had to rely on the sheer tenacity of their writers to map and solve the games of the 1980s. In the late 90s, magazines gradually became mere wrapping paper for distributing demo discs, and then demos went digital, and print magazines all but died.

And then there’s game wikis, community-driven, with neither expectation of pay nor (as with Wikipedia) any obvious power to silence or covertly dominate ideological disputes. Players participate out of love of the game and a desire to help. Even the thought of credit here can’t undermine the claim to altruism since who can honestly name anyone who contributed to a game wiki they used...? It is love for (and pride in) a game that encourages a player to contribute their time to a wiki. Only the ceaseless gerrymandering of altruism in the futile attempt to render the term empty of meaning can prevent its application to the game wiki and other such sites of community co-operation. If only more of the internet was so blessedly free of rancour and naked self-interest!

A Hundred Cyborgs, #75, part of a ten part mini-serial on Gamer Cyborgs.

The politics on Wikipedia (behind the scenes for mods, editors, etc.) are pretty big and wild. We just don't see them as "mere" users and occasional contributors - why would the case be any different for game wikis?

In a related note, it is my understanding that within the gamefaq/guide writing community there's a lot riding on being the first one to get a guide for a hot game out there, so it's not necessarily altruistic with a lot of cred/reputation riding on the celerity of guide writing. I'm not sure how much of a community there is around video-walkthrus, but my guess is that there might be similar politics at stake?

Hi José,
I would not conflate FAQ/walkthrough building with fan wikis since the former are personal actions and the latter are community projects. But these are interesting challenges you raise here, and I shall try to address all your points as best as I can.

Firstly, the politics of Wikipedia are not as hidden as you indicate here... I did quite a bit of digging in this regard while working on Wikipedia Knows Nothing. Because none of the politics occurs face to face, there is a substantial paper trail that allows you to investigate what has gone on behind the scenes on every page. A great deal of the exchanges are cordial and fair. There are, of course, heated discussions, and the closer you get to something people 'claim' as their territory the worse it becomes.

Furthermore, the Wikipedia's vehement alignment of 'significance' with marketing expenditure undermines the goals of the project, with the root problem being the destruction of pages excised by political excoriation. This is a wiki space purporting a curation of knowledge yet its primary function (measured by page edits) is to catalogue corporate trivia in excruciating detail, while eradicating or ignoring a great deal of content on wider topics. It becomes harder and harder to remain convinced that what is going on here is anything akin to an encyclopedia. One might almost say that the degree to which the Wikipedia has crossover with a traditional encyclopedia project is rather incidental! :)

I have enormous respect for the vast majority of Wikipedians... but since it cannot be a universal repository, it must delete pages. This has led it into a problematic situation, one that game wikis as far as I can tell simply do not suffer from because their scope is already narrowed and crystal clear.

Now you challenge me here in the context of the FAQ writing community. This is a very different space to the game wiki community, and is also heavily political. A good friend and colleague of mine has been a moderator on GameFAQs for decades, and has (mildly) shocking tales of what goes on in the margins, albeit all of it petty and none of it extreme. And as you say, there is a thirst for glory that goes with being the first to provide a guide.

Yet this is not a motivating factor as far as I can see in game wikis, which accumulate slowly and carefully through community effort. I'm prepared to be shown a dark side to what goes on here (where humans congregate, there is always something in the shadows!) but I have yet to see it. I remain impressed and in admiration of the community effort behind game wikis, and indeed fan wikis in general.

There is a huge irony in that Wikipedia's primary activity is in fact to serve as a universal fan wiki; any work towards an encyclopedia in a traditional sense is almost incidental to the activity that goes into this process of being one fan resource to rule them all. But again, because its scope is simultaneously unlimited and yet forcibly constrained, and because its editorial policy is self-contradicting, Wikipedia enters into political shenanigans smaller fan wikis seem to avoid. (The sheer volume of people involved is surely another factor in this regard!)

I have enormous respect for those who give their time to any project that shares information. It is only those who spend their time suppressing the sharing of information that I eye suspiciously...

Many thanks for this opportunity to expand upon this piece!